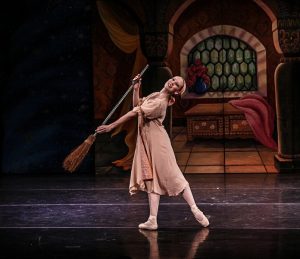 New York Theatre Ballet (NYTB) returns to Danspace Project at St Mark’s Church-in-the-Bowery for their fourth season there. The evening titled Legends & Visionaries, is a new offering of their classic series of revivals by esteemed choreographers and composers with a first look work at emerging choreographers

“This Danspace season includes four of my favorite choreographers: Gemma Bond, José Limón, Richard Alston and David Gordon,” said Diana Byer, founder and artistic director of New York Theatre Ballet. “Gemma Bond is a gifted young choreographer, impressing audiences and critics with each new work. She is premiering her 4th dance for NYTB this fall. Sarah Stackhouse, my former teacher at The Juilliard School, is staging La Malinche a seminal work from José Limón’s rich repertory,. The inspiring Richard Alston choreographed Rugged Flourish for NYTB in 2011 (and a new work coming in 2018), and I’m delighted to bring it back, presenting it for the first time at Danspace. I’ve wanted to work with David Gordon for more than 30 years, as many of his dancers were students of mine, and I never missed his performances. NYTB co. members Elena Zahlmann, Amanda Treiber, Carmella Lauer and Joshua Andino-Nieto danced in David’s LIVE ARCHIVEOGRAPHY at The Kitchen, and he is now revisiting his BEETHOVEN/1999 for NYTB – a dream come true for me! With our Music Director, Michael Scales, we have prepared a seamless evening of live music and dance for our 2017/2018 season.”

Tickets are $22 in advance ($15 members), and $25 at the door, and are available at http://www.danspaceproject.org/calendar/new-york-theatre-ballet-uptown-downtown-dance/.