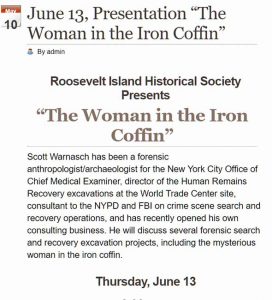 The Woman in the Iron Coffin

(Roosevelt Island, NY, May13, 2019) – As a forensic anthropologist and archaeologist for the New York City Office of Chief Medical Examiner, Scott Warnasch has also served as director of the Human Remains Recovery excavations at the World Trade Center site and consultant to the NYPD and FBI on crime scene search and recovery operations. He will discuss several forensic search and recovery excavation projects, including the mysterious woman in the iron coffin, at a lecture presented by the Roosevelt Island Historical Society at the New York Public Library Branch on Roosevelt Island, on Thursday, June 13, 2019 at 6:30 p.m.

The event is FREE and open to the public. It is the third in the Society’s annual series of spring lectures, which is supported by funds provided by Amalgamated Bank, Roosevelt Island Operating Corporation’s Public Purpose Fund and New York City Council Member Ben Kallos, with funding from the New York City Department of Youth and Community Development.

The Roosevelt Island Historical Society promotes awareness of the Island’s unique story and pursues preservation of its landmarks and artifacts. For more information, please visit www.rihs.us.