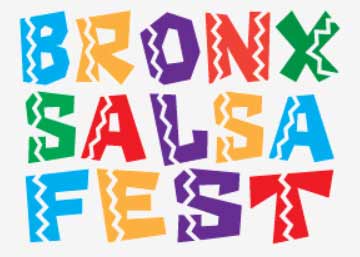 Last week of the Bronx SalsaFest

Join them for the last week of Bronx SalsaFest, in partnership with the New York International Salsa Congress, New York City’s largest and longest-running Latin dance and music event where the world comes to dance every Labor Day Weekend.

South Bronx Latin Music Tour | Explore the history and culture of Salsa in the Bronx with highlights of street life and public artwork that continues to bring vibrancy to the area.  End the tour at Casa Amadeo, the oldest Latin music store in New York City.

Special Presentation by Grammy nominated drummer, Bobby Sanabria, about the musical journey of la clave, the five beats at the heart of Latin music. Against the on-going beat of the clave, Bobby Sanabria plays complex rhythms on various percussion instruments culminating on the drum set. While simultaneously speaking or singing, he demonstrates how the 5-beat clave journeyed from West Africa to Cuba then the U.S. and remains at the core of other musical styles such as funk, R & B, rock & roll, and hip hop.

Food for sale by La Masa

New York, New York – (August 1, 2016)– The New York International Salsa Congress (#NYISC2016), a multi-day Latin music and dance festival, celebrates its 16th anniversary with over 8,000 attendees from around the world at The New York Marriott Marquis in Times Square from Thursday, September 1, 2016 to Sunday, September 4, 2016 with an official kick-off party held at Haus NYC in Tribeca on Wednesday, August 31, 2016, presented by Goya Foods and sponsored by Festival People en Español.

Goya Foods, the largest Hispanic-owned food company in the United States and celebrating its 80th anniversary, will be the presenting sponsor of this year’s festival.  “Goya is proud to support the NYISC, an exciting cultural event held in a city that has been so loyal to our brand for so many years,” said Rafael Toro, director of Public Relations at Goya Foods.  “As we celebrate our 80th anniversary, aligning ourselves with the NYISC and its goal to preserve our cultural roots magnifies the gratitude that Goya feels toward the communities that have been with us for all these decades.”

Each year the #NYISC2016 brings together people of all cultures, ages and backgrounds to participate in this multi-day celebration of Latin music and dance.   From novice to professional dancers, the festival attracts people from all walks of life to establish a sense of community, to gain exposure to different styles of dance and to achieve a higher level of knowledge and expression while sharing the true passion for Latin music and dance.

Attendees will have the opportunity to choose from over 60 instructional dance workshops, view a fantastic showcase of professional dance performances and competitions, and dance all night to a LIVE concert series with Jimmy Bosch and vocals by soneroHermán Olivera “El Sonero del Siglo XXI”(Friday, September 2), Fania legendsADALBERTO SANTIAGO Pagina Oficial(Saturday, September 3), and the one and onlyRoberto Roena Pagina Oficial(Sunday, September 4).

In partnership with The Bronx SalsaFest and LVG New York, the NYISC will begin the week celebrating NYISC Salsa Week at the following events in The Bronx and Manhattan: