Ladies of the House: History from a Feminine Perspective 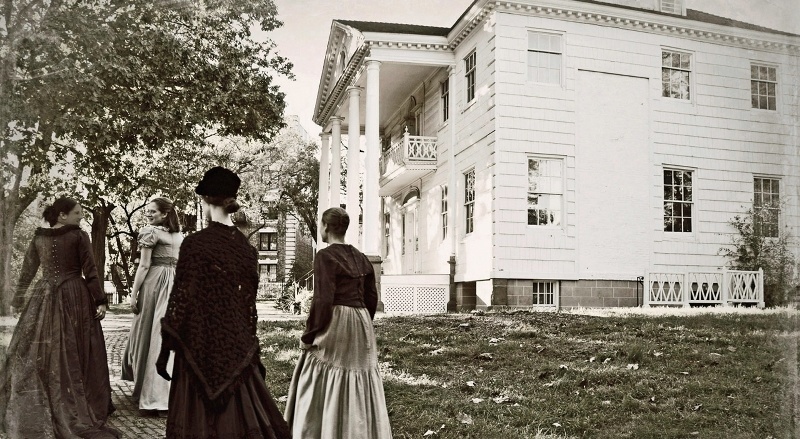 The Morris-Jumel Mansion is pleased to present Ladies of the House: History from a Feminine Perspective, featuring photography by Trish Mayo as part of our Contemporary Meets Colonial exhibition series. Throughout the Mansion’s history women have had a strong presence. The Mansion was built in 1765 for Mary Philipse, by her husband Colonel Roger Morris as a wedding present. The home’s longest owner, Eliza Jumel, lived in the Mansion from 1810 to 1865, and was known as one of the wealthiest women in New York. In 1904, the Washington’s Headquarters Association, formed by four chapters of the Daughters of the American Revolution, began to operate the Mansion as a museum. The most famous and royal visitor of the Mansion, Queen Elizabeth II, visited in 1976.

Today, the female presence in the Mansion continues through many costumed events and performance pieces, which celebrate the vibrant history and the lives of the fascinating women of the Mansion. Artist, Trish Mayo has captured many of the women at these events with her camera. Ladies of the House features six original photographs, which were digitally manipulated to recall nineteenth century photographs, such as daguerreotypes, tintypes, and ambrotypes. As part of this exhibition, Mayo and curatorial assistant, Jasmine
Helm have selected prints and photographs from the Mansion’s archives—on view for the first time—to showcase women’s contributions throughout the Morris-Jumel Mansion’s history as a private residence and museum.

Trish Mayo is a New York based photographer and artist and a staff member at the Morris-Jumel Mansion Museum. Her work has been published in books, magazines, newspapers and websites including the New York Times and online editions of GQ and the BBC. Group exhibitions include the Brooklyn Museum – Click! A Crowd Curated Exhibition; Museum of the City of New York – Rising Waters 2.0 More Photographs of Sandy; and Tate Modern, London – Street or Studio.