Poetic melologue protests our indifference to the everyday reality of boats crowded with migrants that sink at sea.

$18 general admission, $13 seniors and students. Ten $10 tickets will be available to every performance on a first-come, first-served basis.

Runs 1 hour. Critics are invited on or after January 31. 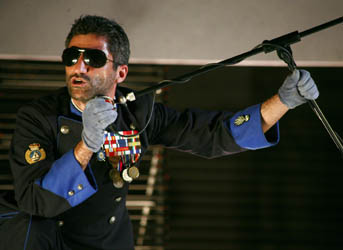 NEW YORK – La MaMa will present Teatro delle Albe of Ravenna, Italy in the American premiere of “Noise in the Waters” (Rumore di acque) January 30 to February 16.  The play is a dark, intense melologue (short work for voice and music) written by Marco Martinelli on the tragedy of migrants in the Mediterranean, based on true stories collected and conceived by Martinelli and Ermanna Montanari.  It is performed by actor Alessandro Renda and multi-instrumentalists Enzo and Lorenzo Mancuso.  Supported by Amnesty International and lionized by Italian critics, the piece protests the indifference of Fortress Europe to the everyday tragedy of refugees from Africa, who have perished for years in the Strait of Sicily on fruitless sea voyages to escape massacres and starvation in their homelands.

Teatro delle Albe, founded in 1983 by Marco Martinelli, Ermanna Montanari, Luigi Dadina and Marcella Nonni, is one of the most important theatre companies on the Italian and international scene.  Its prizes include 14 Ubu Prizes (the “Oscars” of Italian theater), the award by Lo straniero dedicated to the memory of Carmelo Bene, the judges’ prize at the International Fadjr Festival of Teheran, two “Golden Laurels” from the Mess International Festival in Sarajevo and the career achievement prize from the festival Journées Théâtrales de Carthage in Tunis.  The troupe was championed by Susan Sontag, who labeled its production of “Island of Alcina,” a spoken word aria performed by Ermanna Montanari, as one of the most important shows in her entire “career” as a spectator-critic.  That production debuted in 2000 and was presented in NYC in the Coil Festival in 2011.

“Noise in the Waters” (Rumore di acque) depicts a soul of the underworld, clad in a general’s uniform, who has been charged with making a census of the dead at the bottom of the sea, bringing order to a desperate state of bookkeeping.  We find him on a small volcanic islet, a gateway to the kingdom of the dead, whose “policy of welcome” is opposed to the driving away of the migrants who landed there.  He works for the Ministro dell’ Inferno, a play on words for Ministro dell’ Interno.  His job is overwhelming and leads to number games of many kinds, designed to make the audience indignant to his indifference.  Speaking in a gravelly, distorted voice, he occasionally gives faces to the faceless dead lost, telling sardonic stories of refugees named Sakinah, Yusuf, little Jean-Baptiste and Jasmine. They came from Libya and many small villages throughout the Sahara, but their journeys ended in the Strait of Sicily, where the Mediterranean tightens between that island and Tunisia.  His anger is not toward the politics that led them to their cold graves, but toward the fish–pigs of the sea–who render them faceless and make his job hard.  There is a poignant sonic blend as his dramatic, ironic, grotesque utterances are interwoven with poetic and lyrical music by Enzo and Lorenzo Mancuso (voice, harmonium, baglama, Turkish flute and marimba).  These two brothers, originally from the Sicilian province of Caltanissetta, are widely published in Europe and contributed sound tracks for the movie “The Talented Mr. Ripley” by Anthony Minghella.  In this “oratorio for the sacrificed,” they intermingle the ancient Sicilian tradition with other Mediterranean sounds. 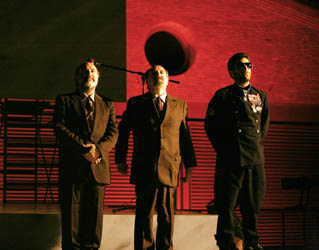 The play will be performed in Italian with English surtitles.  Its translation is by Thomas Simpson, professor of Italian Literature at Northwestern University of Chicago.  This translation has been published by the online university magazine “California Italian Studies,” edited by Alberto Ascoli, and will be brought out in book form in 2014 by publisher Bordighera Press of New York.

Writing in l’Unità, Francesca De Sanctis described the play as “the rambling talk of a phantom general with a chest full of medals who is actually taking orders from a Ministry of Inferno….He, who has the voice and face of the simply amazing Alessandro Renda, tells us brief stories about desperate people who want to go far but die before realising their dream of a better life. True stories, collected by Marco Martinelli and Ermanna Montanari in Mazara del Vallo….It’s a monologue, a little poem in verses that grab you and don’t let you go till the end, this Rumore di acque. Indeed they stick in your head after the show….Live music composed and performed by the Mancuso Brothers, Enzo and Lorenzo, punctuates the events and shakes you to the depths.”

Theater der Zeit (Renate Klett) reported its effect, writing “The shocking everyday reality of overcrowded boats which sink and for which no one feels responsible, is evoked with poetry and accusation like an ancient tragedy, and at the same time re-projected into the present through the reference to fortress Europe and its mechanisms of disregard and defence”.

Corriere della Sera-Bologna (Massimo Marino) called it a memorable show that should absolutely not be missed, writing “The black satirical tone to which Martinelli has long accustomed us is coloured by the Fratelli Mancuso’s music of land and the faraway, and by Renda’s intensity, taut with a note of pain, of pietas, that move and wound. The show leaves us astonished, indignant and not only: it digs beneath indifference, carving out faces, stories and sufferings that continue to live within us for days.”

The play was inspired by stories Marco Martinelli heard in Mazara del Vallo (Sicily) at the headquarters of the nonprofit San Vito organization for immigrants.  The stories were transfigured while maintaining essential aspects.  Some of the play’s refugees are from Libya and the character of the General (from the Ministro dell’ Inferno) bears a passing resemblance Muammar Qaddafi. Martinelli writes, “We thought about Qaddafi, among ourselves we talked about ‘The Qaddafi.’  We wanted to use it as a title for the play. We read his speeches, looked at his photographs. But instead… it would’ve been too easy to take it out on him, to palm the blame off on this sly and bloodthirsty dictator. He’s certainly guilty, and very much so, that umpteenth incarnation of Pa Ubu, but what about us? Me? Are we innocent? Am I innocent? Can I say I’m not responsible for all the tragedies that happen elsewhere, far from my own home? What have I got to do with my brother’s death?”

Set and costume design for “Noise in the Waters” (Rumore di acque) is by Ermanna Montanari and Enrico Isola.

The La MaMa production will be accompanied by a series of special events in Teatro delle Albe’s U.S. tour.  There will be a presentation of the publication “Rumore di acque” by Marco Martinelli in English translation by Bordighera Press at Casa Italiana Zerilli-Marimó at 6:00 PM on January 28 (http://www.casaitaliananyu.org/).  There will be two workshops and a presentation of the play at Montclair State University on February 3, 4 and 18 (see: http://www.montclair.edu/inserra/events).  The Italian Cultural Institute, 686 Park Ave., will host a meeting on the 30-year journey of Teatro delle Albe at 6:00 PM on February 5 (see http://www.iicnewyork.esteri.it/IIC_Newyork).  A non-scuola workshop (see below) will be held with teenagers from three New York schools: La Scuola d’Italia Guglielmo Marconi, La Guardia High School and Corpus Christi School of Harlem in collaboration with IACE. (The final event of the workshop is open to the public; date and place to be announced. See: http://www.lascuoladitalia.org.)  A performance of “Noise in the Waters” will be also presented in Chicago at Links Hall on February 21 and 22.  For complete information on these events, visit www.teatrodellealbe.com/eng/albe-in-the-usa.

Author/director Marco Martinelli is also artistic director, with Ermanna Montanari, of Ravenna Teatro, which has been recognized as “Teatro Stabile d’Innovazione” (Civic Theatre of Innovation) by the Italian Ministry for Cultural Heritage and Activities. Since the start of his theatrical career in the 80s, he has received numerous awards that highlight the importance of his work as playwright-director and artistic director. He is founder of the non-scuola (non-school), a theater experience with adolescents which has become a focal point for many scholars and theatre people and which the Teatro delle Albe has taken all over Italy and the world, from Chicago (USA) to Caen (France), from Dakar (Senegal) to Rio de Janeiro (Brazil) and Mons (Belgium).

Alessandro Renda (actor) entered Teatro delle Albe through the non-scuola (non-school) workshops the company has run in the high schools of Ravenna since 1991.  He appeared in the company’s celebrated production of “I Polacchi,” inspired by Alfred Jarry’s “Ubu Rex,” and in nine other productions.  He heads the company’s video division.

Enzo and Lorenzo Mancuso (music) have performed concerts all over the world and have published CDs in Italy, Spain and the USA with Putumayo World Music. They have had important collaborations in Italian theatre with Emma Dante and composed the soundtrack for the movie “Via Castellana Bandiera,” produced by Rai Cinema and Vivo Film, which was recently awarded the prize for the best soundtrack at the seventieth International Exhibition of Cinematographic Art in Venice.