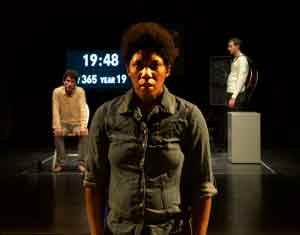 A two-character play of Shavian dialogue, soaring irony and logic.  Ethical issues become drama as humanity argues its case against a man who has made all fossil fuels disappear.  Production employs sustainable design experiments to visually ignite dialogue about energy.

NEW YORK — “JUPITER (a play about power)” by Superhero Clubhouse and Kaimera Productions is an argument of soaring irony and logic between humanity and a dude with one-time magic who has made all fossil fuels disappear permanently from the Earth.  That’s not such an unbelievable premise, when you think about it, because in terms of our global history, we are on the brink of an energy systems overhaul.  Some “man at the switch” could at any time begin shutting our industrial civilization down.  Oh, we’ll be indignant then.  Now imagine a philosophical debate between this overlord and a woman who represents all of humankind.  That is the one-act “dream play” that will be offered to us by playwright Jeremy Pickard, director Simón Adinia Hanukai and musician/energy policy specialist Jonathan Camuzeaux, presented by La Mama from February 11-28, 2016.

The process of making this play involved creative conversations with Michael Gerrard, professor of climate law at Columbia University, and a “Lab” with guest presenter Dr. Gavin A. Schmidt, director of NASA’s Goddard Institute for Space Studies.  The Lab (www.superheroclubhouse.org/lab) is a bimonthly workshop of Superhero Clubhouse, in which environmental scientists and theater artists collaborate on science-based theater performances about pressing environmental issues. The play’s co-creator, Jonathan Camuzeaux, works at Environmental Defense Fund (EDF) as a senior economic analyst and specializes in climate and energy policy.

Inevitably, we know, there will be a tipping point in global ecological collapse, in which world leaders may need to resort to autocratic remedies.  Thematically, the play explores the idea populace vs. authority in the imposition of absolute limits on fossil fuel consumption.  Ethical issues are considered from the perspective of policy and science; specifically, energy policy in the context of climate change.  The play’s “impossible question” is: can it be right or effective to impose radical change for the greater good?

This could be tough stuff to bring to the stage, were it not for Jeremy Pickard’s modern Shavian dialogue and the evocative aural background of Jonathan Camuzeaux’s music.  Humanity (played by Sarah Ellen Stephens) and the dude (played by Jeremy Pickard) lock horns, arguing their perspectives with skill and gusto.  The power has gone out all over the world because the dude has pulled the switch.  Humanity sings and speaks her resistance to this unilateral trick.  She protests:

Did you think I liked blowing up my mountains?
That I took some sick pleasure in lighting my drinking water on ?re?
Did you think I was satis?ed with my systems?
That I was looking forward to cancer, in the same resigned way that I might look forward
to grey hair?
Is that why you did it, for my well-being? …
I have come so far, built so much, made music, and love, fallen again and again, picked
myself up again and again.
I am not perfect, but in one fell swoop, you made my work irrelevant.

Humanity has a tendency to pull herself up by the bootstraps.  Her solution, after decades of suffering, is to sequester all the remaining carbon in the atmosphere and return society to where it was before the dude interfered.  To this the dude replies: you haven’t solved the problem; you were supposed to change.  There’s the rub.  Both characters argue their respective positions with zest.  Their conflicting ideas are electric and challenging; their physicality is skillfully economic so we are not distracted from the ideas in their respective positions.  The dude urges humanity to find the eye in the middle of chaos: a secure place to find stability; to make yourself stronger.  We cannot, despite his eloquence, figure out how exactly we might escape the penalty for our endless drain on the Earth’s resources.  But we are glad to be with him in this thinker’s heaven.

Playwright Jeremy Pickard cites as his literary inspirations Charles L. Mee, Samuel Beckett, and Bertolt Brecht.  His work at the eco-theater company Superhero Clubhouse (www.superheroclubhouse.org), where he is Artistic Director, is rooted in sound science but woven with allegory and hope.  “JUPITER” is the seventh in the organization’s series of nine Planet Plays which together form “a new mythology for our changing world.”  To give you an idea of the tone of their plays: another one by this creative team is inspired by Snoopy and Superstorm Sandy, in which an imaginative dog is stranded on the roof of his doghouse after a hurricane washes him out to sea.  Brooklyn Rail has written, “Weighty worldly questions might produce plodding drama with some artists, but the work of Superhero Clubhouse is playful, inventive, and daring.”

This project has received an Off-Off Broadway Greening Grant from the Broadway Green Alliance to experiment with a solar-cell/battery-powered LED system for its lighting.  The design team (David Bengali, Anshuman Bhatia, Eva von Schweinitz and Angela Harner) is working with Jay Maury, the Senior Technical Advisor of The Bushwick Starr (who has been experimenting with green design for that theater), to execute their design.  It is hoped that this experiment will create dialogue in our (often pretty wasteful) community about the possibilities and challenges of sustainable approaches to theater-making.

“JUPITER” is written by Jeremy Pickard and performed to music composed and performed by Jonathan Camuzeaux.  The production was co-created by Jonathan Camuzeaux, Lani Fu, Simón Adinia Hanukai, Jeremy Pickard, and Megan McLain.  It is directed by Simón Adinia Hanukai and is the first project of a new theater company he is starting with Jonathan Camuzeaux, Kaimera Productions (www.kaimeraproductions.com).  The company is dedicated to examining and redefining questions our global society faces through performances created collaboratively by experts inside and outside the arts.  Set and lighting design are by David Bengali and Anshuman Bhatia.  Sound design is by Eva von Schweinitz.  Costume design is by Angela Harner.

Jeremy Pickard (Playwright, Performer) founded Superhero Clubhouse in 2007 with a developmental workshop of its first Planet Play, “URANUS,” in Ithaca NY.  Since then, he has become a leading voice on theater and environmentalism; most recently his essay “On Eco-Theater,” was published by TCG in the book “Innovations in Five Acts,” edited by Caridad Svich.  Pickard is the lead playwright and co-creator of the Planet Play series and Climate Collaborations, a co-creator of the Lab, and he continues to lead and direct the annual Big Green Theater program and festival, which he runs in partnership with The Bushwick Starr.  Originally from a small town outside Syracuse, NY, he is an alumnus of Ithaca College and the National Theater Institute and trained extensively with SITI Company for eight years.  He wears many hats including director, performer, writer, and producer.

Simón Adinia Hanukai (Director) was a founding member of headRush Crew and the Co-Artistic Director of the Destiny Arts Youth Performance Company, both in Oakland, CA. He has directed “Flying Ace and The Storm of the Century” (Superhero Clubhouse, Odin Teatret, Denmark), Brave Ducks (Living Theatre, NY), “Rest Upon The Wind” (Skirball Center for the Performing Arts), “The Golden Drum Year” (University Settlement, NY), “Les Alibis” (Junevents Festival, Atelier De Paris – Carolyn Carlson, France), “The Fall” (Flamboyán, NY), “Phaedra’s Cabaret” (Flux Industries, NY), “The 6 Project” (Brooklyn Arts Exchange) and “Bumrush” (2010 Hip Hop Theater Fest, NY), and “Wilde Kane” (New York Theatre Workshop Studio, NY), among others.  He has  worked as assistant director to William Forsythe, Anne Bogart, Tina Landau and Robert Woodruff.  Hanukai is the Co-Artistic Director of Kaimera Productions, Performing Arts Curator for MassBliss Productions and a Core Member of Superhero Clubhouse.  He is an Adjunct Professor at the Division of Interdisciplinary Studies at the Center for Worker Education at CUNY and the department of Speech, Communications and Theatre Arts at BMCC in New York.  He received the Dean’s Fellowship from Columbia University and a 2012-13 Emerging Artists Fellowship from New York Theatre Workshop.  He holds an MFA in Theater Directing from Columbia University and a Masters degree in Education from the University of San Francisco’s Center for Teaching Excellence and Social Justice.

Sarah Ellen Stephens (Performer) has appeared in “Girls in Trouble?” (dir. Jim Simpson) and “The Great Recession” (dir. Adam Rapp) at The Flea and at other OOB theaters including Incubator Arts Project, New York Classical Theatre and Human Race Theatre Company.  She has appeared in ten indie films.  She is also a violinist and holds a BFA from the Conservatory of Music at University of Cincinnati.

Jonathan Camuzeaux (Composer/Performer) is a French-American musician, theater artist, photographer and environmentalist.  He is the Co-Artistic Director of Kaimera Productions, as well as a core member of the eco-theatre company Superhero Clubhouse and the co-founder of its Sci-Art Lab.  In 2012, Jonathan created the multi-disciplinary photography project Stack of Fives in order to explore how artists from different disciplines approach storytelling.  He is also the resident music director for The Live Lunch Series and Phaedra’s Cabaret, as well as the bassist for the Brooklyn-based soul band Lady Moon & The Eclipse.  Jonathan holds a Master of Jazz History from Bordeaux III University and a Master of International Affairs from Columbia University’s School of International and Public Affairs.  He works as a Senior Economic Analyst at Environmental Defense Fund in New York.  His theater credits include: The Golden Drum Year (Radical Evolution, University Settlement), EARTH (a play about people) (Superhero Clubhouse, Drama League), Decline & Fall or A Guide to How the End Begins for Those Too Big to Fail (New York Theatre Workshop), Flying Ace and The Storm of the Century (Superhero Clubhouse, Odin Teatret, Denmark), Wilde Kane (NYTW), One Heart for Two (Winkel & Baltick), Phaedra’s Cabaret (Flux Industries), Brave Ducks (Living Theatre, 2011 New York International Fringe Festival), Birthday Triage (Columbia Stages), Much Ado About Nothing (Classic Stage Company).

An integral part of New York City’s cultural landscape, La MaMa has a worldwide reputation for producing daring work in theatre, dance, performance art, and music that defies form and transcends boundaries of language, race, and culture. Founded in 1961 by theatre pioneer and legend Ellen Stewart, La MaMa is a global organization with creative partners and dedicated audiences around the world. La MaMa presents an average of 60-70 productions annually, most of which are world premieres. To date, over 3,500 productions have been presented at La MaMa with artists from more than 70 nations. Honored with more than 30 OBIE Awards, dozens of Drama Desk and Bessie Awards, La MaMa’s programming is culturally diverse, cross-disciplinary and draws audiences from all walks of life. For the third consecutive year, La MaMa will offer its [email protected]$10 program whereby 10 tickets are made available for every performance in every theatre in advance for only $10.