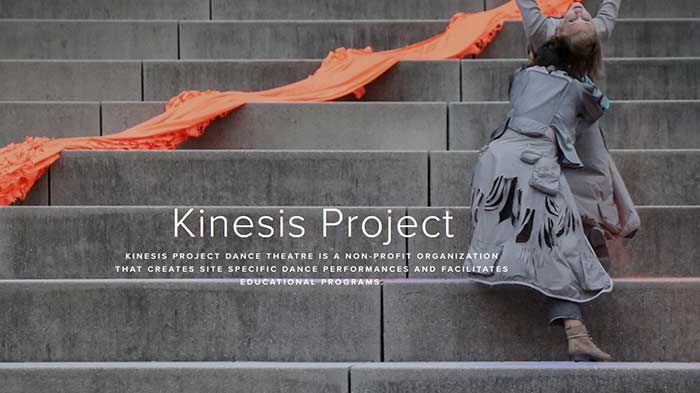 Kinesis Project dance theatre will present the site-specific dance performance Breathing with Strangers, choreographed by Melissa Riker in collaboration with the Kinesis Project dancers on August 23, 2019 at 5pm & 7pm at Riverside Park South (59th Street and Hudson River), NYC. Both performances are free and open to the public. For more information please visit this official page.

This popular, site-specific company’s newest large-scale outdoor dance performance is a ragged, sweeping and surprising love-song to New York City. Twisting and leading along the pathways of Riverside Park South, Kinesis Project dancers will appear in the varied landscapes, inviting the audience amidst willow trees as the performers daringly partner with one another and the fantastic and unlikely spaces of the park. This dance is a first step in collaboration with Opera on Tap, a collective involved in the Mile Long Opera. Breathing with Strangers will surprise, and delight all ages.

Summer on the Hudson programming is free to the public. Kinesis Project dances are not stationary: while there will be opportunities to sit, audiences will be walking along with the performance. Audience space is limited, unreserved, and available on a first-come, first-served basis beginning 1-2 hours before the event. If attendance reaches maximum capacity management reserves the right to close participation. If there is heavy rain at the time of the event, it will be cancelled. To check on cancellation status, please visit: nyc.gov/parks/soh 2 hours before the event. No rain dates are scheduled. To donate to Riverside Park Programming, or to volunteer please call 212.870.3070.

“Melissa Riker explores ideas about how vulnerability exists both in people and in structures; it comes to life within an immersive environment of movement and whispers.”

Breathing with Strangers is made possible in part with funding from the Upper Manhattan Empowerment Zone Development Corporation and administered by LMCC. UMEZ enhances the economic vitality of all communities in Upper Manhattan through job creation, corporate alliances, strategic investments, and small business assistance. LMCC serves, connects and makes space for artists and community.

Melissa Riker is Artistic Director and Choreographer of Kinesis Project dance theatre. She is a New York City dancer and choreographer who emerged as a strong performance and creative voice as the NYC dance and circus worlds combined during the 90s. Riker’s dances and aesthetic layer her training as a classical dancer, martial artist, theatre choreographer and aerial performer. She creates dances on site – and in context. Riker invents large-scale outdoor performances and spontaneous moments of dance for individuals and corporate clients. Audiences and critics have called Riker’s work “a Marx Brothers’ routine with soul,” “A movable feast.” And from The New York Times, her choreography is: “comically acrobatic, gracefully classical, visually arresting.”

Opera on Tap (OOT) was born in 2005 at Freddy’s Bar and Backroom in Brooklyn and incorporated in 2007 to promote opera as a viable, living and progressive art form and to support the developing artists who continue to keep the art form alive. What began as a small monthly gathering of ambitious, classically trained singers looking for more performance opportunities, has grown into a producing organization that has gained a loyal audience base and national recognition as an innovative force on the classical music scene. Through its Chapter program, which now has over twenty vibrant national (and international!) chapters, OOT has created a large network of performers, creators, and supporters.

Since 2005, Kinesis Project’s work has been experienced in San Francisco, San Diego, Seattle, Boston, Philadelphia, Vermont, Florida and in New York City at such venerable venues as Danspace Project, Judson Church, Joyce Soho, The Minskoff Theatre, The Cunningham Studio, West End Theatre and Dixon Place.  In 2019, the company’s work will be experienced in Seattle, Brooklyn, NY, Riverside Park, supported by New York City Parks, and in Snug Harbor Cultural Center on Staten Island. The company dances outside in sculpture gardens, universities, and annually since 2006 in Battery Park’s Bosque Gardens and The Cloisters Lawn as well as hosting more than 30 surprise performances all over New York City and the tri-state area as an element of the company’s earned income and outreach programming with volunteer populated flashmobs. Residencies include: Earthdance 2006, Omi International Arts Center 2008, Kaatsbaan International Dance Center 2011, TheaterLab 2014, Adelphi University 2014. Ms. Riker is a 2016, 2017 and 2019 CUNY Dance Initiative Residency Fellow, 2015 LMCC Community Arts Fund grantee, 2019 Upper Manhattan Empowerment Zone Grantee. She has been commissioned by The Brooklyn Botanic Garden for a surprise large-scale work and performances of her work Secrets and Seawalls at Omi International Arts Center, Long House Reserve, Gateway National Park in partnership with Rockaways Artist Alliance. Ms. Riker has received commissions from Carson Fox and the Ephemeral Festival in 2013, 2014, 2015 and 2016 for large-scale outdoor events, NYU in 1998, for an outdoor work long before “flash mob” was coined, 2006 and 2008 grants from the Puffin Foundation for her work Community Movements, a dance work with community volunteers, Fellowships from the Dodge Foundation, Space Grant Residencies from 92nd St Y, The New 42nd St Studio, Gibney Dance Center, and The Joyce Theatre Foundation, and grants from The Bowick Family Trust and John C. Robinson to support the continued work of Kinesis Project dance theatre. https://www.kinesisproject.com/