K2: DANGER and DESIRE on the SAVAGE MOUNTAIN 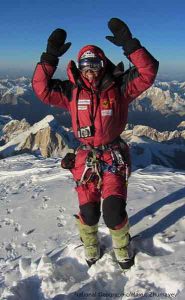 NEW YORK, NY (January 19, 2016) – NYU Skirball Center for the Performing Arts and National Geographic Live are pleased to present Austrian mountaineer Gerlinde Kaltenbrunner, the first woman to scale the earth’s 14 highest mountain peaks without the use of supplementary oxygen, in an adventure-packed multimedia presentation titled K2: Danger and Desire on the Savage Mountain at NYU Skirball Center on February 23 at 7:30 p.m. Kaltenbrunner will share the dramatic story of how she prepared for and triumphed on K2, the world’s second highest mountain, told with breathtaking photos and video from the roof of the world.

Gerlinde Kaltenbrunner has climbed all 14 of the “Eight-thousanders” (the earth’s 14 mountains that are higher than 8,000 meters). When she reached the summit of K2 in 2011, she became the first woman to scale all of the Eight-thousanders without the use of supplementary oxygen. In addition to her passion for climbing the high mountains of the Himalaya, she also is enchanted with the people and culture of the region.

Her achievement earned her recognition as one of National Geographic’s 2012 Adventurers of the Year.

Kaltenbrunner’s primary goal for her 2011 K2 climb, featured in National Geographic magazine in April 2012, was to climb K2 from the remote Chinese side, along the most dangerous route. Known as the mountaineer’s mountain, K2 has taken the life of roughly one climber for every four who have succeeded in making the summit. On this expedition, heavy snowfall just before the team’s summit attempt increased the danger of avalanches on the mountain’s steep slope. The team faced many critical decisions. Two members, including her husband Ralf, decided to abandon the climb halfway through. Kaltenbrunner pushed on with three other climbers, and, despite the dangers, reached the summit first—making mountaineering history.

Gerlinde Kaltenbrunner’s interest in mountain climbing developed while she was growing up in Spital am Pyhrn, Austria. Reverend Erich Tischler, the town’s youth leader, would take her on climbs up the surrounding mountains after church services. At the age of 13, Kaltenbrunner ventured up her first major peak, “Sturzhahn,” a 2,028-meter climb, and then rarely skipped an opportunity to go climbing. She enjoyed ski, ice, and climbing tours while she completed her nursing training in Upper Austria and Vienna. Her greatest dream—climbing an 8,000-meter peak—came true at the age of 23, when she succeeded in climbing the fore-summit of Broad Peak in Pakistan, at a height of 8,027 meters.

She then put the money she earned as a nurse into different trekking and climbing expeditions to the Himalaya. After climbing the Nanga Parbat—her fifth 8,000-meter peak—in 2003, she decided to become a professional mountain climber.

K2: DANGER and DESIRE on the SAVAGE MOUNTAIN, by GERLINDE KALTENBRUNNER will take place on Tuesday, February 23, 2016 at 7:30 PM at NYU Skirball Center for the Performing Arts.  Single tickets range in price from $35 to $70. Member and student discounts are available. Tickets may be purchased online at www.nyuskirball.org/natgeolive, in person at the NYU Skirball Center Box Office: Tuesday-Saturday, 12:00–6:00 P.M. or by phone at 212.998.4941. The NYU Skirball Center is located at 566 LaGuardia Place at Washington Square, New York, New York 10012.

NOTE: The final National Geographic Live presentation of the 2015-16 will feature wildlife filmmaker Bob Poole with “Gorongosa Reborn: A Cameraman’s Journal,” his impressions of the rebirth of Mozambique’s National Park, on Tuesday, March 29 at 7:30 pm at NYU Skirball.

New York University’s Skirball Center for the Performing Arts is the premier venue for the presentation of cultural and performing arts events for NYU and lower Manhattan. Since opening in 2003, the 860-seat Skirball Center has been an educational and community building resource, providing NYU’s first large-scale, professional performance space on campus. Through university events, presentations, and partnerships, the Skirball Center offers a unique multi-arts performance program in its intimate proscenium theater located on the south of Washington Square in the heart of Greenwich Village.