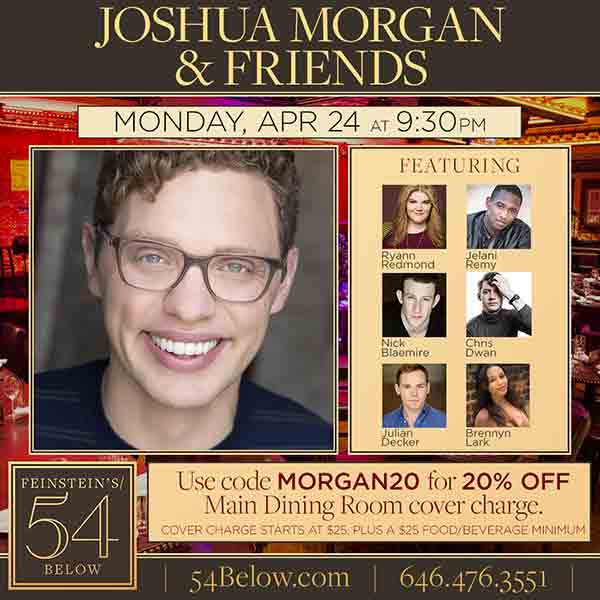 Joshua Morgan (Les Miserables) is joined by a slew of incredible, diverse Broadway talent including Ryann Redmond (If/Then,Bring it On), Jelani Remy (The Lion King), Nick Blaemire (Godspell, Spongebob), Chris Dwan (Finding Neverland), Julian Decker,Brennyn Lark, and many more for songs and stories celebrating the hilarious and personal stories of Joshua’s relationship with this eclectic mix of mega talent and what brought him to New York.

Yaron Gershovsky is widely recognized as an accomplished musician, whose long list of credits demonstrates versatility and excellence as a Pianist/Keyboardist, Arranger, Composer and Producer. Yaron is the Musical Director and Pianist/Keyboardist for the world renowned vocal group The Manhattan Transfer. He has been touring, arranging (Both instrumentally and vocally), and recording with them for the past 30 years.

Yaron arranged, and/or  played piano on two Grammy award winning songs for The Manhattan Transfer. (“Why Not”, and “Corner Pocket”). Yaron has recorded with such great artists as Wayne Shorter, Dr. Lonnie Smith, Steve Gadd,  Janis Siegel, Ray Brown, Grady Tate, Freddie Green, Don Sebesky, the Count Basie Orchestra, and The Manhattan Transfer. He performed with Richie Havens, Pharaoh Sanders, Stan Getz, Louie Belson, the Count Basie Orchestra and The Manhattan Transfer among others. Yaron has also performed in Carnegie Hall under the direction of the famed conductor Michael Tilson Thomas, (Musical Director/Conductor of the San Francisco Philharmonic Orchestra). He was the Vocal Arranger for the hit Broadway Musicals “City of Angels”,  “Song of Singapore”, and  “Swing” as well as numerous other workshops and productions for the Broadway stage in New York. Yaron has also released his own solo CDs, “Personal Notes”,and “State Of Mind” to much public acclaim.