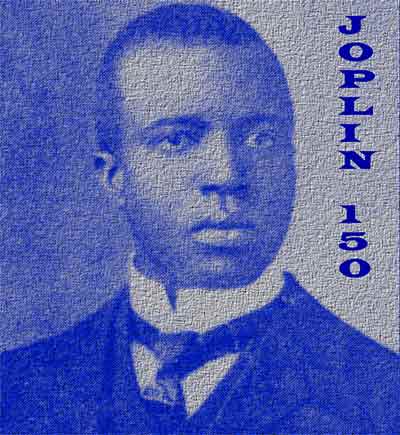 There’s a debate about the birth year of Scott Joplin, the great American composer, pianist, and music teacher known as the ‘King of Ragtime Writers.’ Joplin’s tombstone indicates 1868, however many scholars believe it was probably 1867. If the scholars are right, then 2017 marks not only the centennial of Joplin’s death in 1917, but also the 150th anniversary of his birth.

Staying in rotation for thirty-two years in NYC is a rare feat. In the case of a new music presenting organization, it requires not only diligence and cognizance of achievements of the past, but also an ethic of keeping one’s ear to the ground for emerging stylistic and technological developments, as well as talented new composers on the scene. Composers Concordance strives to present contemporary music in innovative ways, with an emphasis on thematic programming. It has also created a record label, Composers Concordance Records, with distribution by Naxos. Directors Gene Pritsker and Dan Cooper co-curate the programs, and lead the CompCord Ensemble, Chamber Orchestra, String Orchestra, and Big Band. Associate Directors are Milica Paranosic, Peter Jarvis, Svjetlana Bukvich, and Melissa Grey. Composers Concordance’s overriding vision is to promote contemporary music, composers, and new works as a rightful and respected part of society. Good music, performed and recorded well, pushing the boundaries of sound and composition.

“For the past 30 years, Composers Concordance has been a booster for local composers, through both its concerts across the city and a record label.”  -The Wall Street Journal. “Enterprising new music organization” -The New York Times. “The Composers Concordance folks are unpredictable and at times refreshingly irreverent in a reverent sort of way….ingenious fun” -Classical-Modern Music Review. “Edgy…boisterous…demanding our attention” -San Diego Story. “These men and women are creating exciting music with elements of jazz, world music and many experimental techniques blended with equal parts classical tradition and playing techniques.” -Asbury Park Press. “There is considerable evidence to show that Composers Concordance may be one of the most exciting labels in American contemporary music.”

Jacob Rhodebeck is a pianist known for his tremendous command of the instrument and his enthusiasm for performing new and little known music. Most recently, Mr. Rhodebeck gave “a searing performance” (-The New York Times) of Michael Hersch’s 3-hour solo piano work, ‘The Vanishing Pavilions.’ Mr. Rhodebeck performed and recorded Morton Gould’s ‘Chorale and Fugue in Jazz’ for two pianos and orchestra with Blair Mcmillen and the Albany Symphony Orchestra. He has also recorded Christopher Bailey’s Piano Sonata, Ilari Kaila’s piano quartet ‘Kellojen Kumarrus’ with the Escher Quartet, and a trio by Philippe Bodin with the Lost Dog New Music Ensemble. Jacob was a member of the contemporary piano/percussion ensemble, Yarn/Wire, who released their first CD, ‘Tonebuilders,’ in 2010. He attended the University of Cincinnati, College-Conservatory of Music and studied with Elizabeth Pridonoff. It was during this time that his interest in performing new music began in earnest. After receiving his Bachelor’s degree from CCM, Mr. Rhodebeck went on to Stony Brook University to continue his study with Gilbert Kalish. There he completed both his Master’s and Doctoral degrees. He was also a Fellow at the Tanglewood Summer Music Festival for two seasons. Currently, Mr. Rhodebeck is the pianist for the Lost Dog New Music Ensemble and is the Choral Accompanist at the Riverdale Country School and at Sarah Lawrence College. http://www.jacobrhodebeck.com

Jasna Popovic is an award-winning Serbian pianist. Popovic was born in Belgrade, Serbia, where she received her first piano lesson at six years of age. Upon graduating from the music high school in 1997, Popovic moved to Munich, Germany where she attended the Hochschule für Musik und Theater and studied under the guidance of Professors Gitti Pirner and Claude-France Journes. After performing in New York City, Popovic decided to remain living there. She is currently working on her solo album, which will primarily feature classical Serbian music. Popovic has won several awards, including Second Place at the National Piano Competition in Belgrade, Fourth Place at the International Competition in Rome, and is participating at various festivals around Europe, including those in Italy, Germany, and Austria. In 2005, she was honored to be invited to play at the International Keyboard Festival in New York City. Popovic subsequently continued to live in New York. In 2006, Popovic received the Passantino Award for Special Achievements from City University of New York and the following year she performed at Steinway Hall and Lefrack Hall, Carnegie Hall in New York, and Kolarac Hall in Belgrade. Popovic has worked with several artists such as composer Rodin Scedrin, pianist Vadim Suhanov, and double-bassist Roman Patkolo among others.