“”Admission by donation — and we’ll give you a free subscription to Jewish Currents!”” 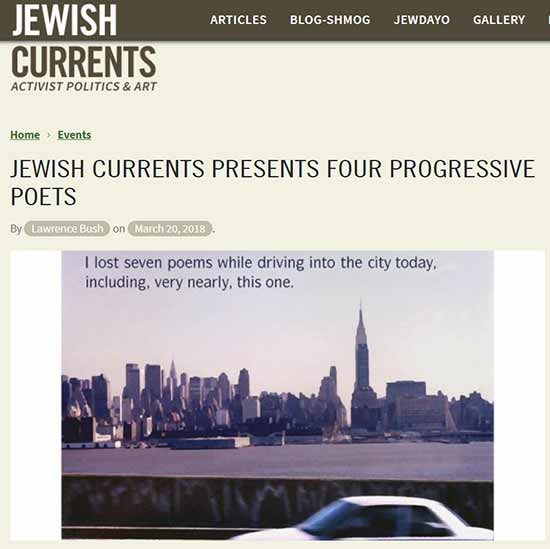 Since 1946, Jewish Currents has given a vibrant countercultural platform to writers. The publication and website have been at the forefront of the struggles against racism, imperialism, unnecessary wars and growing inequality of wealth and income, and also is an advocate for the rights of the working class, women, people of color, LGBTQ persons and immigrants.

Alicia Suskin Ostriker has been called “America’s most fiercely honest poet.” In 2015 she was elected a Chancellor of the Academy of American Poets. She has published nine books of literary criticism and 15 books of poetry, including For the Love of God: The Bible as an Open Book and, most recently, Waiting for the Light. She currently teaches at Drew University’s Low-Residency MFA Program in poetry and poetry in translation. She also served as judge for Jewish Currents’ Raynes Poetry Competition in its 2015-16 season.

Barry Wallenstein, an emeritus professor of literature and creative writing at City College and an editor of American Book Review, is the author of nine books of poetry. Since the 1970’s he has collaborated frequently with jazz artists in performing and recording his poetry, including nine CDs. His most recent books are At the Surprise Hotel and Other Poems and Drastic Dislocations.

Philip Fried is a New York-based poet and founder of the international literary journal, The Manhattan Review. He has published seven books of poetry, most recently Squaring the Circle. Fried also collaborated on Acquainted with the Night, which combines night photography with poetry.

Marc Jampole is the author of Music from Words and Cubist States of Mind/Not the Cruelest Month. His poetry and more than 1,800 of his freelance articles have appeared in many journals, magazines and anthologies. A former television news reporter and public relations executive, he writes the popular OpEdge blog and is the president of the editorial board of Jewish Currents.