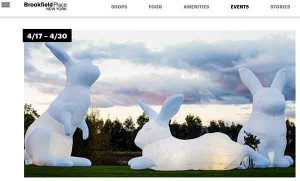 For its national tour of Intrude, Arts Brookfield commissioned two giant rabbits, each scaling over two-stories in height, with one approximately 39 feet high and the other 39 feet long. These rabbits will join Intrude’s five original sculptures, which have brought a joyful spirit to more than 19 major cities throughout the world, including London, Perth, Paris and Boston. The New York launch of the installation marks the one-year anniversary of the reopening of Brookfield Place New York and celebrates more than 25 years of Arts Brookfield’s animation of non-traditional spaces with world-class arts and cultural experiences that are free and accessible to the public.

ABOUT AMANDA PARER:
Australian artist Amanda Parer’s edgy and ephemeral artworks explore the natural world, its fragility and our role within it. With startlingly beautiful creatures enlarged and frozen within their chosen habitats. When viewing one of these iconic, mostly feral animals inhabiting a beautifully haunting landscape, the environmental message is enhanced by the artist’s finely crafted traditional technique in any of her chosen mediums such as painting, sculpture and public installation. Parer is an artist originally from Sydney but now resides in Tasmania where her work has been acquired by both public and private collections. She has been selected for notable national competitions including five times for the Blake Prize, as well as for the Glover Prize in 2008, 2012 & 2013.
Amanda has just completed a new light art installation called Fantastic Planet which was commissioned by Winter Lights Festival in London. Her current projects range from developing a new work in collaboration with MIT Boston and working on a full exhibition at Harbour City Gallery in Hong Kong in October 2016, which will include paintings, sculptures, and installation.