The 74th Anniversary Of The Attacks On Pearl Harbor 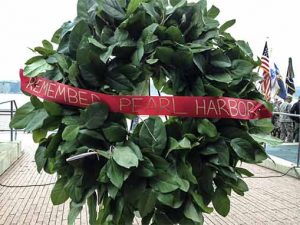 From 11:00 am to 11:30 am, Pearl Harbor survivors from the New York metropolitan area and former USS Intrepid crewmembers will attend a wreath-laying ceremony on the ship’s fantail. Pearl Harbor survivor Clark Simmons and Intrepid Sea, Air & Space Museum President Susan Marenoff-Zausner will each deliver remarks, and the event will conclude with a commemorative wreath laying in the Hudson River.

From 12:45 pm to 2:15 pm, the Museum will broadcast a live feed of the National Pearl Harbor Remembrance Day Commemoration from Joint Base Pearl Harbor-Hickam in Hawaii. This ceremony is co-hosted by the National Park Service and the United States Navy and will feature Pulitzer prize-winning historian David Kennedy.

Throughout the day, Museum Tour Guides will give free 15-minute “Stories from Pearl Harbor” Tour Guide Talks in the Hangar Deck.

All Pearl Harbor Day activities are free with Museum admission.