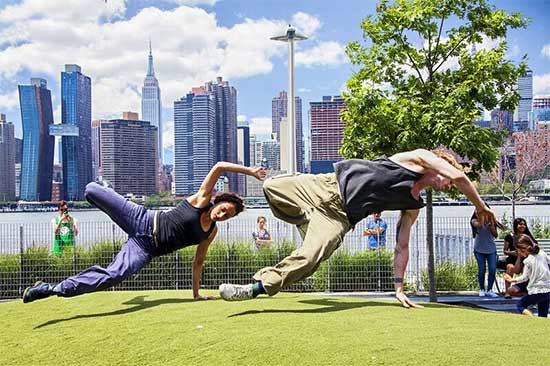 on the Western Queens Waterfront

INSITU Site-Specific Dance Festival, a New York Times Top Pick of “24 Outdoor Performances to See in the Summer in NYC” in 2017, is a unique event presented in four public parks along the East River waterfront in Queens. For two days in August, neighborhood residents and visitors are invited to discover LIC through cutting edge site-specific contemporary and urban dance.

Now in its second year, INSITU 2018 will transforms the Western Queens waterfront into one giant stage on August 4 & 5 from 1 pm to 8pm daily. Twenty new commissioned works by regional, national and international choreographers selected from over 200 applications will be presented in Hunters Point South Park, Gantry Plaza State Park, Queensbridge Park and Socrates Sculpture Park, including new site-specifics works by Douglas Dunn (NYC), Chantal Caron/Fleuve Espace danse (Canada), Sarah Elgart | Arrogant Elbow (Los Angeles) and Alice Gosti (Seattle). One hundred and sixty performances representing 32 hours of dance will be organized into 4 performance rounds per park per day, each lasting approximately 90 minutes and all starting at the same time in each park at 1 PM, 3 PM, 5 PM and 7 PM. Additionally, INSITU 2018 will offer audiences the opportunity to interact directly with several choreographers from last year’s festival in a 20-minute workshop presented after the first three performance rounds. The four choreographers will be announced in May.

Another important element of INSITU 2018 will be the Community Dance Workshop, hosted by Jacob A. Riis Neighborhood Settlement and facilitated by a socially engaged choreographer over four weeks in June, culminating with a performance at the Festival in August.

INSITU is free and open to the public, offering an exciting way to experience dance in unusual public spaces. Inspired by natural and urban landscapes of the public parks, the diverse line-up of 20 contemporary and urban dance companies will maneuver through playgrounds, partner with benches, appear in hidden corners and dance on piers, staircases and shorelines. Other sites within the parks include a beach, historic railway ties, piers, promenades, lounge chairs, thicket of trees, a stone platform, and more. Audiences will be led through continuous dance performances several times throughout the day, setting up a chain of dynamic and immersive performances throughout the four parks.

A festival map, with performance schedule and locations, will be available at each park as well as available on the INSITU 2018 website, insitudancefestival.com.

INSITU’s mission is to activate public spaces through dance, spark dialogue and create community through the arts. It’s an initiative that aims to strengthen, bridge and celebrate the diverse communities living along the Long Island City waterfront by using dance as a tool for deeper community engagement. INSITU aspires to make dance accessible, connect artists with audiences, and raise awareness of the  power of movement by bringing it into public spaces of our community. INSITU is a supportive platform for artists to develop new work and strives to increase the visibility of the arts in Queens.

GETTING TO THE FESTIVAL

Attendees can now travel to  INSITU  2018 by car, ferry, bus and subway. We recommend taking the subway to Long Island City, and then walking, biking or busing along the Festival route!

By bicycle: Citibike is now available throughout Long Island City and along the INSITU festival route from Hunters Point South Park north to Socrates Sculpture Park. For fares and station map, visit citibikenyc.com.