IDEAS CITY explores the future of cities around the globe with the belief that art and culture are essential to the vitality of urban centers. Founded by the New Museum in 2011, it is a major collaborative initiative between hundreds of arts, education, and community organizations. The biennial IDEAS CITY Festival takes place every other May in New York City, while IDEAS CITY Global Conferences are organized in key cities around the world. This May, the New Museum will present the third IDEAS CITY Festival in downtown New York that will include a conference, workshops, activities on the street around the Bowery, and dozens of independent projects and public events that function as forums for exchanging ideas, proposing solutions, and accelerating creativity. The theme for the next IDEAS CITY: NY is The Invisible City, and the full program will be announced in early 2015.

The Festival kicks off with a series of talks, panels, discussions, and short films at the Great Hall at Cooper Union. Speakers will include some of the world’s most forward-thinking visionaries, who will discuss key civic issues and formulate action for the city of tomorrow. Panels will examine the following topics and questions:

Lawrence Lessig, Director of the Edmond J. Safra Center for Ethics, Harvard University, advocates for the open-spectrum movement and the need for a Second Constitutional Congress.

Bjarke Ingels, an architect renowned for his innovative approach to sustainable development and renewable energy, is conceptualizing a park to protect New York City from rising water surges and is designing Google’s new campus in Palo Alto, California.

Trevor Paglen created the term “Experimental Geography” and uses his work as an artist to shed light on the erosion of privacy.

Micah White, Cocreator of Occupy Wall Street and Founder of the Boutique Activist Consultancy specializing in “impossible campaigns” and the handshake between capitalism and activism.

Jillian York, Director for International Freedom of Expression at the Electronic Frontier Foundation, specializes in free expression in the Arab world.

Christopher Soghoian, principal technologist at the American Civil Liberties Union, is an expert in the role played by third-party service providers in easing law enforcement surveillance of their customers.

On the second day, IDEAS CITY upends typical formulas of conference-making by replacing talks and panels with a day of private workshops and an evening of performative actions. This inspiring circus of activity will animate a basilica, gym, and a neighborhood street, illuminating invisible undercurrents in our city. Programming includes:

THE STREET
Saturday, May 30

One hundred cultural and community groups will transform the streetscape around the Bowery neighborhood into a temporary city of ideas, redefining public space through participatory programming and unexpected structures for gathering, several of which will be constructed from normally invisible commercial materials. Free and open to the public, all ages. Highlights include:

A full schedule of events and ticketing information will be announced in the coming weeks. 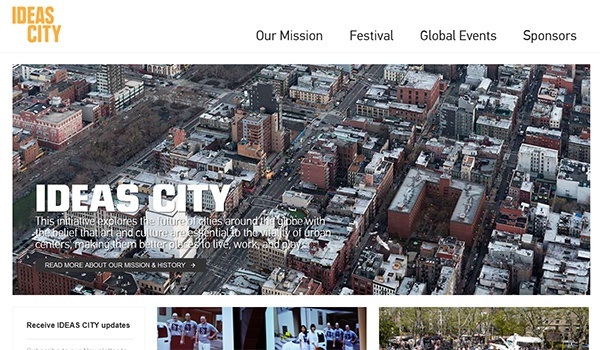