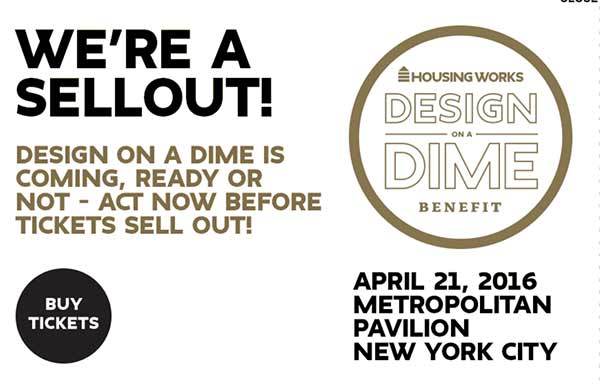 On April 21, 2016, Housing Works will present New York City’s most popular interior design benefit event at the Metropolitan Pavilion in Chelsea. Design on a Dime features more than 60 of the world’s top interior designers, who create unforgettable room vignettes with new merchandise, which is donated and then sold for 50 to 70 percent off retail!

Attracting a star-studded crowd, the Opening Night Reception is celebrated with hundreds of VIPs, designers, and friends of Housing Works. A-list design enthusiasts mingle with top designers, including event chairs. Guests will get the first public look at the room vignettes and enjoy exclusive preview shopping, cocktails, hors d’oeuvres, and live entertainment.

Join Design on a Dime Founding Chair James Huniford, along with Co-Chairs Michael Boodro, editor-in-chief of ELLE DECOR, interior designer, television personality and design blogger Nicole Gibbons, and George Oliphant, host of NBC’s George to the Rescue, to celebrate twelve years of Design on a Dime.

On April 20, the eve of our premier shopping fundraiser, Design on a Dime, the Groundbreaker Awards Host Committee and Founding Chair James Huniford, are thrilled to host the fourth annual Groundbreaker Awards Dinner. The festive evening will bring together Housing Works’ closest friends and supporters from around the country to honor outstanding individuals who have made a significant contribution to the fight to end HIV/AIDS and homelessness.

The Groundbreaker Awards Dinner will take place in the beautiful Metropolitan Pavilion, giving guests an exclusive look at the 60+ room vignettes and the opportunity to mingle with many of the event’s participating designers. Most importantly, this evening will raise crucial funds to continue our housing expansion efforts throughout the city, providing hundreds of clients a solid foundation from which to build a successful future.