HONOUR: Confessions of a Mumbai Courtesan 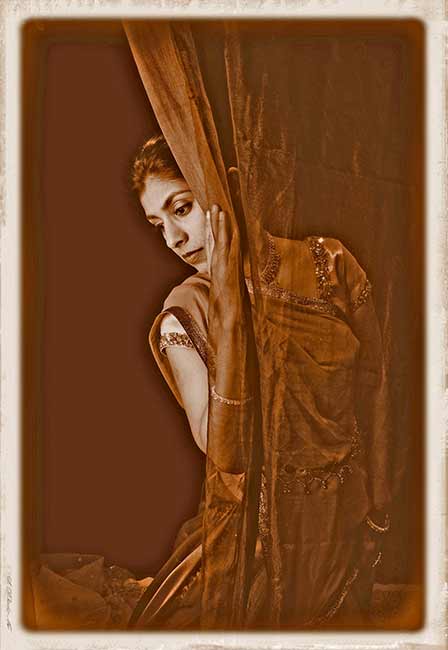 Winner of Best Solo Show in the 2016 Fringe NYC

HONOUR: Confessions of a Mumbai Courtesan is a fun, poignant and deeply moving coming of age story of a girl in a brothel. In this one-woman show, meet the priest, pimp, Madame, eunuch and others that make up her world. HONOUR delves into a child’s life pushed to the brink; will she escape her fate?

Memoirs of Geisha meets Slumdog Millionaire in this vibrant award-winning stage show with original music, colors of India and a riveting mother-daughter tale told in the shadow of a Mumbai brothel by Dipti Mehta. Referencing both the Mahabharata and contemporary Bollywood, experience this boldly acted and danced protest to the contemporary sex trade and abuse of young women in India.

“Dipti Mehta is a passionate performer. Her vibrant piece, HONOUR, has her living and acting out multiple roles, demonstrating social constructs of gender that victimize girls and women. Funny, sad, educational, and fiery, HONOUR is a valuable example of theatre with social conscience.” – Ashley Judd

“HONOUR is Mysterious, logical, Tragic, Empathetic and Kind as life itself. Our minds, are organized by stories, its how we understand other people, Honour in giving us this story allows us to enter another world and empathize.”  – Gloria Steinem

Dipti Mehta (Playwright/Performer) discovered the power of theater at the young age of 6 in Mumbai, India when she was first cast in a school play. This marked the beginning of her acting career, though she was yet unaware that she had indeed discovered her calling. When she was 13, an All India Radio (AIR) programming officer spotted Dipti at an elocution competition and offered her an opportunity to write and broadcast her ideas. It was here Dipti found a platform to express her developing feminist ideas, and also where she eventually became a radio jockey on FM at AIR, as well as a voice over artist and a live host for major events. Dipti believes theater is a powerful means for social transformation. Desire to make a difference through art is at the core of all her work and is reflected in HONOUR: Confessions of a Mumbai Courtesan. HONOUR in particular has made Dipti a sought after speaker both as a feminist and an advocate of women’s rights. She has been on anti-sex trafficking panels with FBI agent Mara Schneider; writer and social worker Stuart Perrin; law professor Gloria Brown Marshal; and with groups like ECPAT and AF3IRM. Central to her artistic practice is the need to give voice to those who have none. It is in this light that she created HONOUR as an attempt to give voice and a face to brothel dwellers bringing their humanity to encounter that of her audiences. TV credits include Shades of Blue (NBC), The Blacklist(NBC), Golden Boy (CBS), Deadline Crime with Tamron Hall (Investigation Discovery), One Life to Live, Hum-Tum (ZEE NEXT), and Yoga for you (ZEE International). Film credits include Accommodations, Humor Me, Split, I Dream of Hope, Midnight Delight, Far Away, Penumbra (Cannes Short Film Corner), A box came to Brooklyn, Life! Camera Action (Winner11 nominations and 3 awards), A good life, Walkaway, Mamarosh, Red Corvette, Victory, Colors of Passion, and Summer of 2007. Theater credits include A Muslim in the Midst(Yale), Half Hearted (Cherry Lane Theater), Grahan…the Eclipse (Winner – 4 awards), Nishfal (Winner-2 awards), Get Back, Vagina Monologues (Abingdon Theater), Honour (Fringe-NYC, La MaMa & Urban Stages) and Bollywood Wedding. Dipti also has a PhD in Molecular and Cellular Biology and works at Memorial Sloan Kettering Cancer Center in the field of Prostate Cancer Research.

Mark Cirnigliaro (Director) has been working as a professional actor, director and coach for the last 16 years in New York City and the surrounding area. As an actor he studied with the famed William Esper at William Epser Studios. Mark has appeared in One Life to Live, As the World Turns, Guiding Light, All My Children and 30 Rock as well as the independent features The Project, Absolute Trust, Loveless and Wildlike. Mark has won the Samuel French Competition twice with The King and The Condemned by Larry Brenner (Actor) and Mountain Song by Josh Beerman (Director). He was the only male director with an official selection at Eve Enslers original V-Day UTVS Film Festival. He directed the first scholastic productions of Annie Baker’s The Aliens and Rajiv Jospeh’s Bengal Tiger at the Baghdad Zoo as well as numerous world premiers, most notably The Hounds of War by Bill Holland (Broadwayworld.com “Must See”), The Little Princess by Jennifer Bowen (June Havoc Theatre), The Judgment of Fools by Bernardo Cubria (INTAR Theatre) and Honour by Dipti Mehta (Urban Stages). Mark is the Associate Artistic Director of Mile Square Theatre, a company member of InViolet Theatre and co-founder of Wee Man Productions. He is currently an adjunct theatre professor at Nassau Community College and Hudson County Community College. He graduated Rutgers University’s Mason Gross School of the Arts with his MFA in Directing, earning the Dean John I Bettenbender Award for Artistic Excellence.

Baruch Performing Arts Center is an acclaimed performing arts presence. Located in the heart of Manhattan just east of Chelsea and the famed flatiron building, BPAC presents renowned classical music, opera, jazz, theater, dance, discussion, film, and innovative cross-genre programming. BPAC has presented over 1,000 cultural programs in its 5 spaces since 2003. Its curated season of 40 programs ANNUALLY emphasizes new work experienced in intimate settings, the diversity of American culture as exemplified by Baruch students (who come from 130 different countries), and work that lives at the confluence of art and social justice.