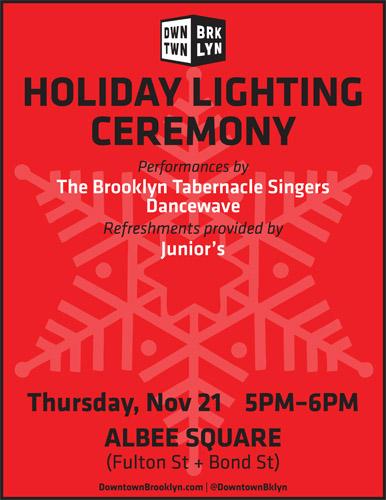 Join the Downtown Brooklyn Partnership, Borough President Marty Markowitz, and other elected officials as they turn on the holiday lights throughout Downtown Brooklyn, including Fulton Street and Albee Square.

This year’s annual Holiday Lighting Ceremony will feature performances by the Brooklyn Tabernacle Singers and Dancewave. Refreshments will be provided by Junior’s.

The Lights will be turned on along the Fulton Mall and Surrounding Areas.

Beginning November 30, Free Downtown Brooklyn Holiday Trolley will be Back for Four Consecutive Saturdays
From 12:00 – 6:00 pm

Downtown Brooklyn’s popular Holiday Trolley will also return for four consecutive Saturdays between Thanksgiving and Christmas, offering free hop on, hop off service throughout the neighborhood. Each week will feature different activities aboard the trolley: historian on November 30 and December 7, carolers from the Brooklyn Conservatory of Music on December 14, and Santa Claus on December 21.