Gypsy of the Year 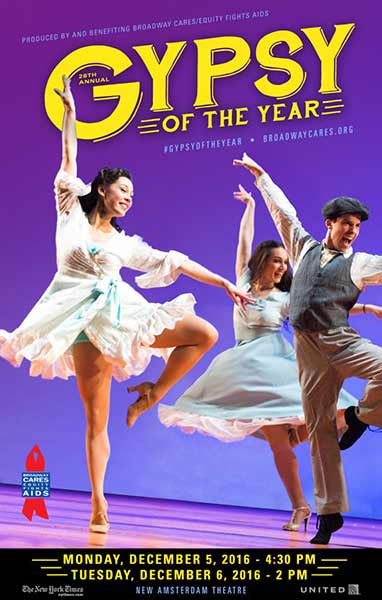 Broadway’s brightest stars will come together to celebrate six weeks of fundraising with never-before-seen skits, songs and dances as Gypsy of the Year returns for its 28th year.

Casts, crews and volunteers at Broadway, Off-Broadway and national touring productions around the country will stand with Broadway Cares’ iconic red buckets in hand accepting donations at theatre exits. Theatre enthusiasts on both sides of the bucket will have the opportunity to raise money for the most vulnerable among us, helping provide lifesaving medication, healthy meals, counseling and emergency financial assistance. In addition to priceless face time with cast members while they are collecting, audiences will have the opportunity to purchase autographed memorabilia and exclusive experiences in exchange for a donations at many of the shows.

The fundraising efforts will culminate in two sensational days of original performances from Broadway’s best singers and dancers in the ensembles of shows, affectionately called “gypsies.” Awards will be presented to the top fundraisers and to the best presentation among the two days of performances.

Twenty-one Broadway shows have begun their appeals: Aladdin, Beautiful – The Carole King Musical, The Book of Mormon, Cats, The Color Purple, Falsettos, Fiddler on the Roof, Hamilton, Holiday Inn, The Humans, Jersey Boys, Kinky Boots, The Lion King, Matilda The Musical, Oh, Hello on Broadway, Paramour, The Phantom of the Opera, School of Rock – The Musical, Something Rotten!, Waitress and Wicked, plus Off-Broadway’s Avenue Q, Cagney, Love, Love, Love, The Marvelous Wonderettes, Naked Boys Singing!, NEWSical The Musical, One Funny Mother, Othello: The Remix and Stuffed. Scheduled to join the fundraising next week are Broadway’s The Cherry Orchard, Chicago and On Your Feet!. More shows will be added throughout the six-week campaign. Last year, 54 Broadway, Off-Broadway and national tours raised $4.8 million.

Since 1989, the 27 editions of Gypsy of the Year have raised $67.3 million to benefit Broadway Cares/Equity Fights AIDS.