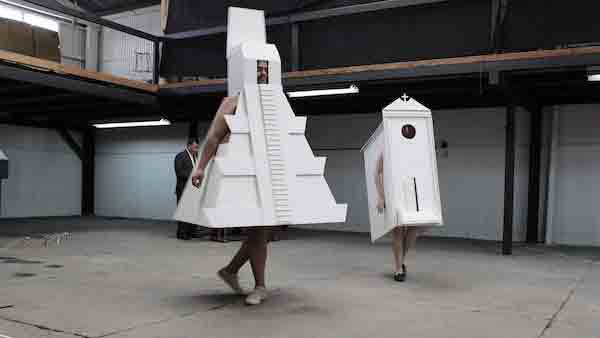 On May 5, three performance works will be presented in the museum’s Frank Lloyd Wright rotunda.

Tickets are $15, $10 for members, and $8 for students and can be purchased by calling the Box Office at 212 423 3587 or visiting guggenheim.org/publicprograms. Support for the performance is provided by Guggenheim Latin American Circle members Ximena Caminos and Alan Faena, Catherine Petitgas, and Camila Sol de Pool.

Furthering its mission of collecting, preserving, and interpreting the art of our time in a global context, the Solomon R. Guggenheim Foundation has presented several exhibitions of Latin American art in recent years, including Doris Salcedo (2015) and Gabriel Orozco: Asterisms (2012–13), and produced Sanatorium by Pedro Reyes (2012). Through the Guggenheim UBS MAP Global Art Initiative, a distinctive program that creates direct access to contemporary art and education on a global scale via in-depth collaboration with artists, curators, and cultural organizations from three regions including Latin America, the Guggenheim increased its holdings of Latin American art by twenty percent and appointed Pablo León de la Barra as Guggenheim UBS MAP Curator, Latin America. Under the Same Sun: Art from Latin America Today (2014–16), presented in New York, Mexico City, and London as part of the Guggenheim UBS MAP Initiative, featured more than fifty new works added to the collection.

Since the 1960s, the Guggenheim Museum has presented numerous performances in the rotunda by artists including Marina Abramović, Philip Glass, Dominique Gonzalez-Foerster, Pierre Huyghe, Joan Jonas, Meredith Monk, and John Zorn as well as performance-based exhibitions and installations by Matthew Barney and Tino Sehgal. Recognizing performance and time-based media as an essential aspect of art practice, and the issues it raises—regarding duration and ephemerality, the role of the document and the function of memory, the value of labor and the significance of personal interaction— the Guggenheim remains committed to the process of acquiring, maintaining and displaying ephemeral, durational works of art.

Latin American Circle Presents: An Evening of Performance at the Guggenheim

Amalia Pica’s Asamble (2015) takes the form of a procession involving more than two dozen participants—the circular form of which evokes a universal emblem of assembly—and explores the challenges of democratic communication. Naufus Ramírez-Figueroa’s A Brief History of Architecture in Guatemala (Breve Historia de la Arquitectura en Guatemala, 2010) is a dance performed in costumes modeled after iconic Mesoamerican building typologies—a Mayan pyramid, a colonial church, a modernist block—and examines the tendency of architecture to memorialize regimes of power and exploitation. In Kitchen Drumming(Batuque na cozinha, 2013/17) by OPAVIVARÁ!, basic kitchen tools mounted to the body become percussive instruments in a performance that fuses celebration and protest by evoking carnival parades, marching bands, and anti-government demonstrations.

A reception and private view of the current exhibitions Visionaries: Creating a Modern Guggenheim and The Hugo Boss Prize 2016: Anicka Yi, Life is Cheap will follow.

Naufus Ramírez-Figueroa was born in 1978 in Guatemala City, receiving a BFA in Media Arts from Emily Carr University, Vancouver, in 2006, and an MFA from the School of the Art Institute of Chicago in 2008. He was a postgraduate researcher at Jan Van Eyck Academie, Maastricht, the Netherlands, in 2013. Ramírez-Figueroa has had solo exhibitions at Casa de América, Madrid (2011), Akademie Schloss Solitude, Stuttgart (2011), and Gasworks, London (2015). He has participated in group exhibitions including A History of Interventions, Tate Modern, London; Gwangju Biennial, South Korea (both 2014); The School of Nature and Principle, EFA Project Space, New York; BMW Tate Live: Performance Room, Tate Modern, London (all 2015); São Paulo Biennial (both 2016); and Venice Biennale (2017). He is the recipient of a John Simon Guggenheim Fellowship (2012), a DAAD fellowship (2015–16) and the 2017 Mies van der Rohe Award. Ramirez-Figueroa lives and works in Berlin and Guatemala City.

ABOUT THE LATIN AMERICAN CIRCLE

Formed in 2016, the Latin American Circle, co-chaired by Clarissa Bronfman and Rudy Weissenberg, is a dynamic group of art collectors actively involved in contemporary art and culture in Latin America. Dedicated to advising on and advocating for the Guggenheim’s Latin American contemporary art initiatives, the group works closely with curator Pablo León de la Barra to facilitate the museum’s ongoing efforts to diversify and strengthen its programming and collection through both emerging and established artists from Latin America.

ABOUT THE SOLOMON R. GUGGENHEIM FOUNDATION