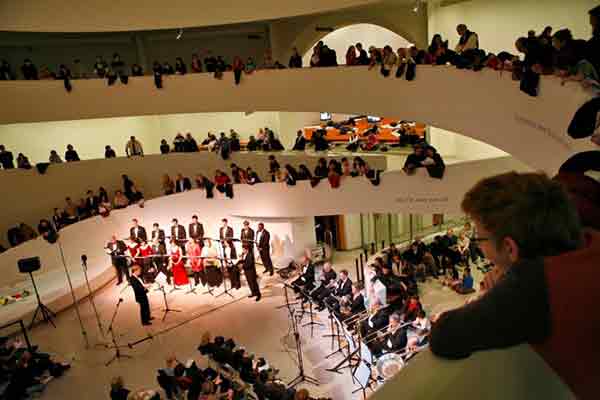 Works & Process at the Guggenheim announces

Holiday Concert in the Rotunda

Sunday, December 18 and Monday, December 19, 2016 at 7:00 pm, Works & Process at the Guggenheim presents the annual Holiday Concert featuring New York composers and a World Premiere Commission by Grawemeyer Award-winning Composer Sebastian Currier.  Celebrate the season with the joyous sounds of holiday music in the museum’s iconic rotunda. George Steel conducts the Vox Vocal Ensemble in what has become a revered annual tradition.

The Agnes Martin exhibition will be view in the rotunda.

John Corigliano – Christmas at the Cloisters

In the Bleak Midwinter – Harold Darke

Carols for All to Sing:

Joy to the World

Once in Royal David’s City