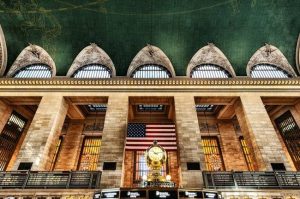 Grand Central Terminal’s Vanderbilt Hall is transforming into a movie theater for a day for its first “Grand Central Cinema” event, hosted in partnership with Rooftop Films and the Museum of the Moving Image. Visitors can enjoy film scenes featuring Grand Central throughout the day for free while munching on snacks purchased from Grand Central vendors like Great Northern Food Hall, Shake Shack, and brand-new restaurant Wok Chi. The day will conclude with a ticketed full screening of North by Northwest, which features Cary Grant’s classic Grand Central getaway scene.

The architect James Sanders—co-writer with Ric Burns of the acclaimed eight-part PBS series New York: A Documentary Film, and author of the landmark book,Celluloid Skyline—will present a special illustrated talk at 12:30 pm on Grand Central in the movies.  Featuring dozens of rare and unusual images from his collection, the presentation will trace the extraordinary role the terminal has played in American film history.

The Rooftop Films screening of North by Northwest will begin at 7:30 pm, introduced by MoMI Chief Curator David Schwartz. RSVPs for the event have sold out, but interested parties can join the wait-list here. The Campbell Bar, Zaro’s Family Bakery, and Beer Table To Go are among Grand Central vendors that will sell dinnertime beverages and treats for the screening.

For more information on the event, the full schedule, and ticket reservation, please visit here.