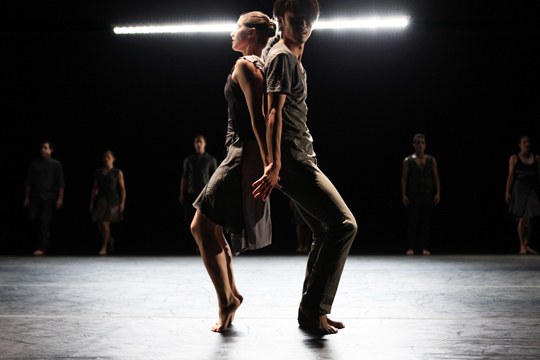 DANCE GOTHAM continues to present a thrilling range of aesthetics and artistry with three full programs at the Skirball Center for the Performing Arts. From post-modern athleticism to seasoned theatricality, these programs, curated by Jodee Nimerichter (American Dance Festival) offer choreographic works that are sophisticated, witty, wonderfully intelligent and revealing. 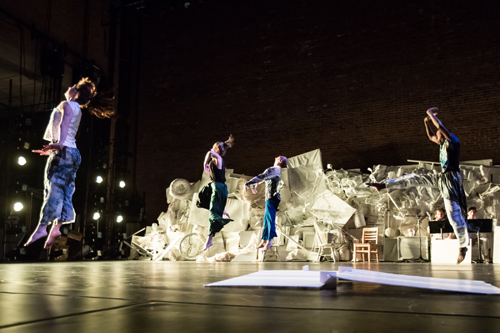 DANCE GOTHAM is a part of FOCUS 2014, the National Platform to promote American dance both abroad and nationally.  The week-long platform presents performances of U.S.-based dance companies during the annual Arts Presenters Conference in New York City, and one of the largest gatherings of artists, dancers and dance professionals in the U.S.  During the second week in January, four venues partner with Gotham Arts Exchange to present the artistic visions of the curators gathered to shape this year’s edition:

FOCUS 2014 is produced by Gotham Arts Exchange and made possible with major support from the National Endowment for the Arts, New York State Council on the Arts, and the New York City Department of Cultural Affairs.  www.focusdance.us 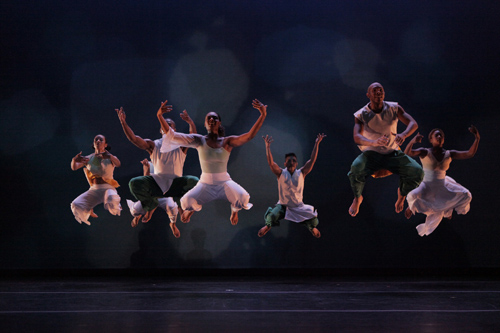 Adele Myers began her company, Adele Myers and Dancers in 2000 as part of her MFA Thesis project at FloridaStateUniversity. The company is made up of 4-5 female members (though there once was a man). The work, brimming with robust athleticism, wit, and a personalized theatricality tends toward a humanist perspective that emphatically emphasizes people dancing, not simply dancers moving. AMD has been presented throughout the eastern seaboard including Bates Dance Festival (ME), Jacob’s Pillow Inside/Out (MA), Danspace Project’s FSU alumni Academy Dances (NY), Dance New Amsterdam (NY), Vermont Performance Lab, New Haven International Festival of Arts and Ideas (CT), among many others. AMD was awarded a National Dance Project for the creation and touring of her newest work in progress, Einstein’s Happiest Thought, which premiered in Sept 2013.

Known for high theatricality, gutsy moves and virtuosic musicality, Camille A. Brown & Dancers soar through history like a whirlwind. The company’s work explores typical, real life situations ranging from literal relationships to more complex themes with an eye on the past and present. Making a personal claim on history, through the lens of a modern female perspective, Camille A. Brown leads her dancers through dazzling excavations of ancestral stories, both timeless and traditional, as well as immediate contemporary issues. The work is strongly character based, expressing whatever the topic is by building from little moments, modeling a filmic sensibility. Theater, poetry, visual art and music of all genres merge to inject each performance with energy and urgency.

Chris Yon and Taryn Griggs have been dancing together since 2002. They met during The Bessie Schonberg Artist Residency at The Yard on Martha’s Vineyard. Chris and Taryn have since performed their dances many places, most recently as part of Jaime Carrera’s Outlet Performance Festival, WalkerArtCenter’s Momentum New Dance Works 2011 at The Southern, 9×22 at Bryant Lake Bowl, and ODC Theater (SF) & VelocityDanceCenter (Seattle) as part of the SCUBA National Touring Network. Yon and Griggs have performed together with David Neumann, Karinne Keithley Syers, Yoshiko Chuma, Irish Modern Dance Theater and Liz Roche Company. They are Sage Award winners (2009) and McKnight Fellows (Yon 2011, Griggs 2012). They live in South Minneapolis with their daughter, Beatrix. To see some of their work, visit chrisyon.net.

With the vision to create innovative, inclusive, movement-based performance that is radically humanistic and accessible, David Dorfman Dance has a long-standing commitment to enlivening audiences through performance and community engagement in order to foster critical dialogue, debate, and social change. DDD has performed extensively throughout North and South America, Great Britain, Europe, and in New York City’s major dance venues, including The Brooklyn Academy of Music, The Joyce Theater, The Kitchen, Danspace Project/St. Mark’s Church, La Mama Theater, and The Duke on 42nd Street. David Dorfman, the Company’s dancers and artistic collaborators have been honored with eight New York Dance and Performance (Bessie) Awards. David Dorfman Dance has been a Company-in-Residence at ConnecticutCollege since 2007, appears annually at the Tisch Dance Summer Residency Program at New YorkUniversity, and holds biannual Company Intensives in New York City and New London, CT.

Dušan Týnek Dance Theatre (DTDT) is currently celebrating its tenth anniversary year, which will culminate in a season at the Brooklyn Academy of Music. The 8-member, Brooklyn-based contemporary dance company is led by choreographer Dušan Týnek and has held home seasons at leading dance venues throughout NYC. The company supports the creation and presentation of new work by Týnek and his artistic collaborators. DTDT has held eight highly-acclaimed NYC seasons at leading dance venues and has performed in numerous festivals and theaters throughout the U.S., Europe and Russia. DTDT has received commissioning, touring, production and general support grants from major foundations as well as from the NYC Department of Cultural Affairs and the National Endowment for the Arts. The company is well-regarded for its exceptional and innovative repertory and programming, as well as its “superb ensemble” of exceptionally trained dancers.

Founded in 2007, Gallim Dance is a New York-based contemporary dance company dedicated to creating and performing original work by Andrea Miller, nurturing the careers of young artists, and stimulating the imagination of a diverse international audience. Miller’s work embodies fearless physicality, grounded by deep humanity and expressed through the madness and joy of the imagination. Gallim performs for over 15,000 audience members per year in many premier venues. In 2012, the company was featured on the cover of Dance Magazine, commissioned by world-renowned Nederlands Dans Theater 2, and honored for ‘movement innovation’ at a TEDx conference. Gallim’s 2013 highlights include an inaugural performance in the BAM Fisher Theater, European tours to the Theatre National de Chaillot in Paris and the Festival Tanztage in Austria, and the season launch of the 2013-14 Guggenheim Works & Process.

Hubbard Street 2, founded by Julie Nakagawa and Lou Conte in 1997 and now led by Terence Marling, prepares dancers ages 18 to 25 for careers in contemporary dance, and identifies next-generation choreographers. HS2 has been honored to perform at many prestigious venues including the JohnF.KennedyCenter for the Performing Arts, Joyce SoHo and North CarolinaSchool of the Arts. In addition to performing at festivals around the world, HS2 has appeared in Germany, Luxembourg, South Africa and Switzerland. As part of its mission to identify and nurture young choreographers, HS2 initiated a National Choreographic Competition in 1999. Each year, the competition provides residencies allowing winners to create original works for HS2 dancers, and opportunities to conduct master classes. Nearly 30 premieres have been created for HS2 through the program, which has earned an esteemed reputation and international participation.

LeeSaar The Company was established in Israel in 2000 by Lee Sher and Saar Harari. The company uses the different disciplines and training of theater and dance to create contemporary dance performances. The company members are from Taiwan, South Korea, Canada the United States and Israel. In 2004, after residency in Sydney, Australia, and two seasons in Tel Aviv, the company moved to New York City, where it is currently based. In 2005, Lee and Saar received American green cards awarded for excellence in the performing arts.

Paul Taylor 2 Dance Company has brought Mr. Taylor’s repertoire to nearly 400 cities around the world since its creation in 1993. With six dancers, it is modeled after the dance maker’s original 1954 Company. Critics and audiences cheer as Taylor 2 introduces the humor, range of emotions and astonishing athleticism that characterize Taylor dances – often to audiences that have never before seen modern dance.

“Praised by the New York Times as “one of the most profound choreographers of his modern dance generation,” Ronald K. Brown blends African, modern, ballet and social dance styles to tell stories that illuminate the human experience. Founded in 1985, his Brooklyn based company, Evidence, executes a seamless fusion of traditional African and contemporary dance that is set to soul stirring music framed in exquisitely staged ensemble structures. Brown’s work strives to kinetically illuminate a sense of community that, while steeped in in African and African-American history and culture, creates a spiritual connection to shared struggles and triumphs in contemporary world society. The company is widely known and highly praised for its excellent work on an off the stage. Evidence specializes in creating transformative community engagement experiences that include but are not limited to multi-generational masterclasses, text and movement workshops, and lecture/demonstrations for all ages.

Since their discovery in 2009 by Charles Reinhart after the premiere of Various Stages of Drowning: A Cabaret, Rosie Herrera Dance Theatre has quickly become a beloved fixture in the contemporary arts scene in Miami. With a whirlwhind success that has taken them from sold out performances at the prestigious American Dance Festival, The Adrienne Arsht Center for the Performing Arts of Miami Dade County and most recently The Baryshnicov Arts Center NYC, the company is becoming a force to be reckoned with in the national dance scene. Known for its diverse ensemble that consists of some of Miami’s most brilliant performers and creators ranging in genres from theater, performance art, opera, drag, and contemporary ballet, RHDT has had the privledge of performing 2 ADF commissioned pieces and premiering them at the American Dance Festival as well enjoying unprecedented success in Miami.

Acclaimed by audiences and critics alike, Petronio is widely regarded as one of the leading dance-makers of his generation. New music, visual art and fashion collide in his dances producing powerfully modern landscapes for the senses. He has built a body of work with some of the most talented and provocative artists in the world, including composers Son Lux, Valgeir Sigurðsson, Nico Muhly, Fischerspooner, Rufus Wainwright, Lou Reed, and Laurie Anderson; visual artists Janine Antoni, Cindy Sherman, Anish Kapoor, Donald Baechler, and Stephen Hannock; fashion designers Adam Kimmel, Benjamin Cho, Rachel Roy, Tara Subkoff /Imitation of Christ, Tanya Sarne/Ghost, Leigh Bowery, and Manolo; and Resident Lighting Designer Ken Tabachnick. Founded in 1984, Stephen Petronio Company has performed in 26 countries throughout the world, including over 35 New York City engagements with 17 seasons at The Joyce Theater.

Gotham Arts Exchange, Inc. is a non-profit arts organization set-up to provide administrative, management, booking, fundraising, insurance, and fiscal sponsorship services to the artists that make up the roster of Zia Artists. The idea behind Gotham Arts Exchange is to “pool” the resources of many companies together to be able to afford the many aspects of running a non-profit corporation that is vital to the infrastructure of a dance company. By doing this, each dance company that is not an incorporated non-profit becomes a sponsored project of the organization.  Gotham Arts Exchange began producing at The Joyce Theater in 2006, presenting Battleworks and Paradigm, followed by Keigwin+Company and Battleworks (2008), Nicholas Leichter and Keigwin+Company (2009), Gotham Dance Festival (2010, 2011, 2012), Camille A. Brown & Dancers (2012), and Working Women: Celebrating the American Female Choreographer (2012, 2013). The most recent venture is FOCUS (2012, 2013, 2014), a new initiative that promotes American dance during APAP.

The JackH.SkirballCenter for the Performing Arts is the premier venue for the presentation of cultural and performing arts events for New YorkUniversity and lower Manhattan. Led by executive producer Jay Oliva (President Emeritus, NYU) and executive director Michael Harrington, the programs of the SkirballCenter reflect NYU’s mission as an international center of scholarship, defined by excellence and innovation and shaped by an intellectually rich and diverse environment. A vital aspect of the Center’s mission is to build young adult audiences for the future of live performance. www.nyuskirball.org