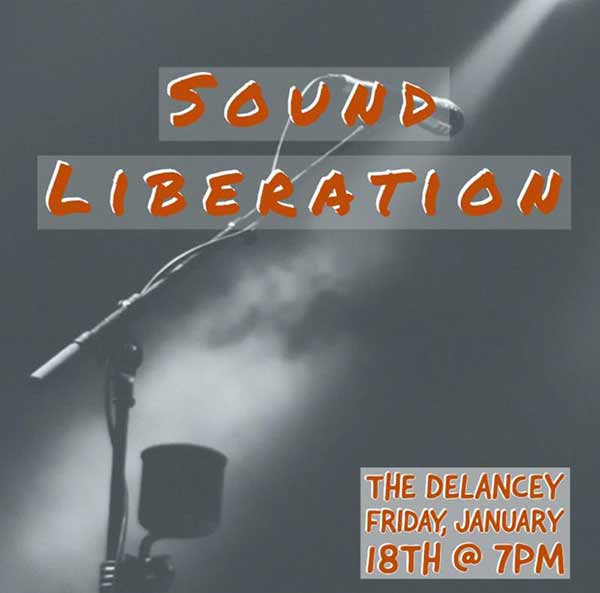 Sound Liberation takes the stage of lower east side’s The Delancey to perform an eclectic set of music composed by Gene Pritsker. Premieres include ‘Granite’ for trumpet, guitar, bass and drums. Also the premiere of a composition based on a poem of Erik T. Johnson called ‘The Caring Dead’, with the poet as narrator.

‘In his typical eclectic style, mixing hip-hop and beats with jazz, Gene Pritsker gives ‘The Rite Of Spring’ a contemporary twist.” – United-mutations.

Sound Liberation, an eclectic chamber ensemble/band, was formed in 1996. The band has gained exposure in the New York city area and has generated a loyal core following playing such notable venues as Joe’s Pub, Wetlands, Knitting Factory, The Blue Note, Downtime, New Music Cafe, Cutting Room,, Le Poisson Rouge and many other performing spaces.   Sound Liberation’s musical philosophy, developed by band founder Gene Pritsker, is based upon “ending the segregation of sound vibration (i.e. musical Genres)”. The group incorporates its philosophy by performing compositions that encompass a diverse range of musical genre, heavily influenced by hip-hop and rock rhythms. This enables one to hear elements from classical music to Jazz to music of various cultures at a Sound Liberation show.

Composer/guitarist/rapper/Di.J./producer Gene Pritsker has written over six hundred compositions, including chamber operas, orchestral and chamber works, electro-acoustic music and songs for hip-hop and rock ensembles. All of his compositions employ an eclectic spectrum of styles and are influenced by his studies of various musical cultures.

He is the founder and leader of Sound Liberation; an eclectic hip hop-chamber-jazz-rock-etc. ensemble and co-director of Composers’ Concordance. Gene’s music has been performed all over the world at various festivals and by many ensembles and performers. He has worked closely with Joe Zawinul and has orchestrated major Hollywood movies.

The New York Times described him as “…audacious…multitalented.” Joseph Pehrson, writing in The Music Connoisseur, described Pritsker as “dissolving the artificial boundaries between high brow, low brow, classical, popular musics and elevates the idea that if it’s done well it is great music, regardless of the style or genre”. Classical Music Sentinel writes:  “His expressive reach is so wide as to encompass everything from ethno/techno, rock/jazz fusion, classical opera and more, and it all seems to be effortlessly integrated within his anima and comes out through different facets of his persona. You could almost see him as a modern day renaissance man.

He is the co-director of Composers Concordance (CC Records), co-founder/guitarist of Absolute Ensemble and artist-in residence at the Austrian Outreach Festival.