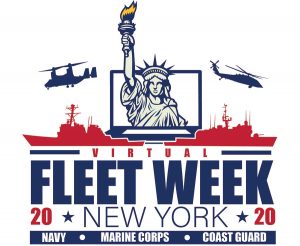 NORFOLK, VA (NRMA) – In an historic event from Military Island in front of the Recruiting Station in Times Square as part of Virtual Fleet Week New York, 12 future Sailors from the Bronx, Brooklyn and central/northern New Jersey are scheduled to swear into the Navy and recite the Oath of Enlistment live tomorrow at 2 p.m.

As safety is the upmost priority during the COVID-19 pandemic, all future Sailors will adhere to strict CDC social distance guidelines and wear protective masks during the ceremony. Media is invited to attend and the enlistees will be available for interviews at the conclusion of the ceremony. Media interested in attending the ceremony should contact Lt. Eric Durie, Deputy Director, Navy Office of Information East at (410) 507-2572, social distance and arrive on location at 1:50 p.m.

“This is a momentous occasion and I can’t think of a better way to usher in the Memorial Day weekend. For each of them, this marks the beginning of their individual transitions into the United States Navy and careers as Navy Sailors,” said Rear Adm. Charles W. Rock, Commander, Navy Region Mid-Atlantic. ‘During this unique time for our nation, being a part of this ceremony demonstrates their devotion to service and drive to be a part of America’s Navy to meet our mission that never stops.”

In addition to the enlistment ceremony, tomorrow’s schedule of events will include:

10 a.m. – Learn how to maintain your fitness at home with Marines on Instagram.

Additional content will appear on social media throughout the day, including a photo contest where people can share their favorite #SelfieWithASailor moment from previous Fleet Weeks, and shout-outs from New York natives aboard USS Wasp (LHD 1).

All content that has appeared on the Fleet Week New York social media feeds can be found at www.fleetweeknewyork.com.