Murder, vengeance and intrigue as Claudius tries to modernize the kingdom. 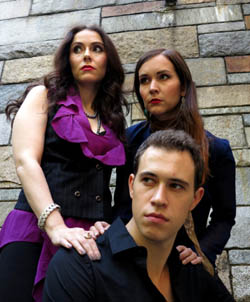 NEW YORK – When Lynnea Benson stages “Hamlet” with Frog and Peach Theatre Company, it’ll be as a face-off between Scandinavian cultures.  Bloodthirsty old Scandinavia confronts sleek, modern Scandinavia in a beautifully costumed, paranoid thriller that lets “Hamlet” live up to its reputation as Shakespeare’s most suspenseful play.  The production will be October 17 to November 10 at West End Theater, 263 West 86th Street.

Hamlet was Danish and Lynnea Benson is of Swedish descent.  She grew up in the fishing and logging town of Ballard, WA, which she says was heavily Scandinavian.  She says, “I know the Scandinavian temperament because I am one.”  Shakespeare, she says, may have been playing to the prejudices of his audience, who had reason to view the Danes as dangerously barbaric.  The Elizabethan Englishman, she explains, was terrified because the Norse didn’t fight with English logic.  The English fought army-to-army and their game was to take hostages for ransom, or property to barter for political gain.  The Norsemen didn’t take hostages, they just killed everybody.  “You know what loving cups have handles on both sides?,” she asks. “It’s from the Viking tradition of drinking from the skull of your enemy.”

Benson adds, not only were they violent,  they were Vvery hard drinking and sentimental when drunk.  This made them laughable to the English, which Hamlet refers to in Act 1, scene 4, saying:

This heavy-handed revel east and west
Makes us traduced and tax’d of other nations:
They clepe us drunkards, and with the swinish phrase
Soil ouR addition; and indeed it takes
From our achievements, though perform’d at height,
The pith and marrow of our attribute.

Benson’s idea, then, is to make Hamlet’s Denmark a state at the crossroads of old and new.  Claudius, she says, is manipulative and ruthless, but he is trying to take Denmark into modern times: solving problems with diplomacy, not violence, unlike his brother, the impulsive, quick tempered King Hamlet.

It adds up to a violent play where passions run high, conflicts are fierce and secrets are hard to keep.  Elsinore is a place where spies are everywhere and you never know who might be listening at a nearby chamber.

The costuming will be a mix of the Victorian and the primitive, to accentuate the conflict of cultures.  Elsinore is conceived as “Denmark’s elegant palace of the damned,” where unfolds a beautifully dressed , paranoid detective thriller.

In an unusual interpretation, Rosencrantz and Guildenstern will be re-imagined as women: Well-born, seductive monsters who grew close to Hamlet in Wittenberg, but who can’t stop the rampage that the prince is building up to.

The actors are Brando Boniver as Hamlet, Vivien Landau as the Queen, Megan McGarvey as Ophelia, Jonathan Reed Wexler as Horatio, Stephen Siano as Laertes and Eric Doss as Ghost/Gravedigger.  Amy Frances Quint and Ilaria Amadasi play Rosencrantz and Guildenstern.  Lighting design is by Dennis Parichy, set design is by Andy Estep, costume design is by Lindsey Vandervier, movement is by ToM Knutson and combat sequences are choreographed by Marcus Watson.  Music is by Ian McDonald (of King Crimson and Foreigner).

Frog and Peach Theatre Company (www.frogandpeachtheatre.org), now in its ninteenth season, was co-founded by Ted Zurkowski and Lynnea Benson — both lifetime members of The Actors Studio– and is dedicated to bringing Shakespeare’s plays in a way that is thrilling, fast-paced, true to the text, and startlingly relevant to modern audiences. Artistic Director Lynnea Benson has directed over two dozen Shakespeare productions for Frog and Peach including “Measure for Measure,” “The Taming of the Shrew,” “A Midsummer Night’s Dream,” “Two Gentlemen of Verona,” “Twelfth Night,” “Cymbeline,” “Macbeth,” “As You Like It” (with Sidney Williams and Emmy-winner Camryn Grimes) “Richard III” (starring Anatol Yusef of HBO’s “Boardwalk Empire”); “Hamlet” (with Austin Pendleton as Claudius and The Ghost); “Richard II” (with Mr. Pendleton as Richard), “Macbeth” with Jason Kuschner in the title role, “The Merchant of Venice” and “King John” (with Oscar nominee Catalina Sandino Moreno as Blanche).

In 2012, the company presented “The Taming of the Shrew” at the West End Theatre.  Deidre Donovan (Curtain Up!) labeled the production “gutsy,” “well-cast” and “tightly directed by Lynnea Benson,” declaring “The Frog and Peach Theatre Company is one of the most durable and best-kept secrets in the New York theater community. Whether it is mounting one of the Bard’s familiar, or not-so-familiar, works, you can bet the actors and creative team will deliver the Shakespearean goods. This Shrew is no exception, and it won’t break your wallet either.”  Ralph Greco (www.shortandsweetnyc.com) called it “a briskly-paced 2 hours of absolute delight.”

In 2011, the company presented a memorable production of “A Midsummer Night’s Dream.”  NY Theater Buying Guide (Ronald Gross) deemed it “One of the best theater bargains in New York City!”  Frog and Peach was called “a brave company that is a jewel of Off-Broadway” and the production was praised as “overflowing with delicious performances.”

“Hamlet” will be presented in repertory with a series for young audiences, “Tinkerbell Theater,” which adapts Fairy Tales to theater with a “Rocky and Bullwinkle” touch.  Two productions, “Cinderella” (adapted from Grimm’s Fairy Tales) and “The Tinderbox” (adapted from Hans Christian Anderson), will be mounted; both are written and directed by Lynnea Benson and feature sing-along songs by Ted Zurkowski and playful puppets by Spica Wobbe.  These family productions will take stage October 19 to November 10 on a rotating schedule, Saturdays and Sundays at 11:30 AM and 12:30 PM.  All shows are followed by a puppet-making workshops to which all kids attending will be invited. Tickets $12 in advance, $15 at the door, box office: Smarttix (212) 868-4444. www.smarttix.com. Runs :45; recommended for ages 3 and up.  For complete information, see:  www.jsnyc.com/season/tinkerbell.htm.

The West End Theater is located at 263 West 86th St. (B’way and West End Ave.).  “Hamlet” will be performed Thursdays through Saturdays at 7:30 PM and Sundays at 3:00 PM beginning October 17 and running through November 10. General admission tickets are $18.00 and seniors and sudents are admitted for $12 ON SMARTTIX WITH TICKET CODES. For tickets call SMARTTIX at 212-868-4444 or visit www.smarttix.com.  The building, theater and its restrooms are all wheelchair accessible.