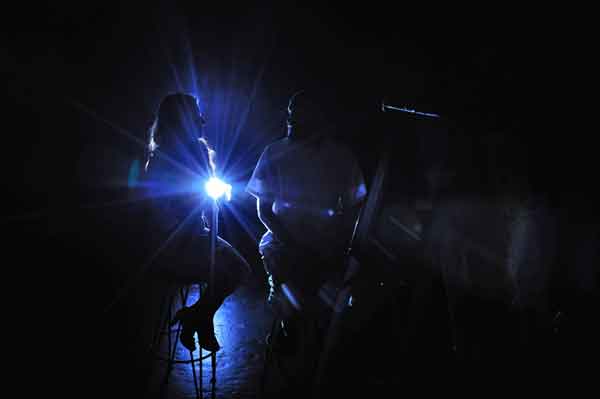 Death To The Pumpkin Pie Show

The 20th Anniversary & Final Show Ever!

After 20 years of bringing macabre tales of madness and murder to the East Village, writer Clay McLeod Chapman is driving a stake into the heart of his long-running storytelling staple The Pumpkin Pie Show. Join him and scene-stealer Hanna Cheek along with special guests for one final foray into the abyss with their favorite literary perversions from the last two decades.

FRIGID New York @ Horse Trade will present Clay McLeod Chapman’s DEATH TO THE PUMPKIN PIE SHOW at UNDER St. Marks (94 St. Marks Place between 1st Avenue and Avenue A) October 12-28 with performances Thursday through Saturday at 8pm. Tickets ($20) may be purchased in advance at www.horseTRADE.info.  See all Three Shows for the Price of Two when you use the code PIE.

To celebrate the passing of this downtown institution—along with the recent release of the story collection NOTHING UNTOWARD: TALES FROM THE PUMPKIN PIE SHOW (Applause Books)—we have put together a Pumpkin Pie Show retrospective, cherry-picking a few of our favorite productions from the Pie’s past. See one, see them all; no two shows are the same:

Hanna Cheek plays three women drawn together in the grim aftermath of a high school shooting.

“Will leave you wringing your hands in helpless empathy.” -SEE Magazine

Written by Clay McLeod Chapman with Songs by Kyle Jarrow

As an outbreak of norovirus spreads through a luxury cruise-liner, one family must fight for survival onboard this sun-and-blood soaked voyage into insanity.

“Thoroughly marvelous, gross and peculiar, not to mention a cause for huge, unbecoming snorts of laughter.” -Time Out NY

(WARNING: Not for the weak-stomached. Paramedics were called during the original run for fainting audience members!)

20 years. Over 60 stories. Hanna and Clay celebrate their 20th anniversary of the Pumpkin Pie Show with a hand-selected roster of their favorite stories. Every story will be chosen at random each night onstage, guaranteeing each show will be completely different from the last.

“Chapman uses the macabre to explore the humanity of his characters and reveal an almost spiritual side to the horrific.” -The New York Times

THE PUMPKIN PIE SHOW Celebrating its second decade of performances, the Pumpkin Pie Show is a literary fist in the face. Part storytelling session, part boxing match, part shamanistic ritual, the Pumpkin Pie Show has established itself as an all-points artistic hodgepodge of theatre and literature. We pick and choose the essentials of both mediums, channeling their rocking properties to create an intimate relationship between performer and audience. We want to see the whites of our audience’s eyes. Certain basic rules that we’ve set up for all our shows are: No sets. No costumes. No nothing beyond the text and the performance itself. Our goal is to strip away those elements that we find extraneous to the tale being told, conjuring up an atmosphere of “creating something out of nothing,” as well as focusing on that ethereal connective tissue between the one telling the story and our audience. Packed with enough emotional intensity to feel like a rock concert rather than just spinning a yarn, the Pumpkin Pie Show is pure bedtime stories for adults.

FRIGID New York @ Horse Trade is a theater development group with a focus on new work that produces a massive quantity of stimulating downtown theater every season. FRIGID’s Resident Artist Program offers a home to a select group of Independent theater artists, pooling together a great deal of talent and energy. FRIGID New York grew out of the annual FRIGID Festival, the first and only festival of its kind in New York City to offer artists 100% of their box office proceeds, and Horse Trade Theater Group, a self-sustaining theater development and management group.  www.horseTRADE.info