A Great Day of Music & Entertainment for a Great Cause 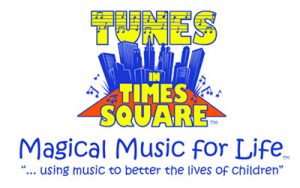 Magical Music for Life Foundation is thrilled to present its fourth annual TUNES IN TIMES SQUARE benefit concert Sunday, May 3, 2015 at 10:00 a.m. – 6:00 p.m. on the Broadway Pedestrian Plaza between 46th & 47th Streets in Times Square. This event will be a continuous sing-a-thon, with members of the Broadway community, talented children & groups from the tri-state area, and the Magical Music singing groups taking turns on the stage. The goal of the concert is to raise awareness of their music and to raise funds for the production of more free, downloadable original songs written specifically for children with special needs and autism. The financial support also helps MMFL concertize and perform these songs for children in schools and community centers.

Last year’s TUNES IN TIMES SQUARE audience numbered in the thousands and the funds raised enabled Magical Music to complete new songs for their “Songs for Skills” library and concertize their first album for children with special needs into a musical revue. Their goal is to provide children of all abilities with music that engages and transforms the way they understand themselves, others, and the world around them. This year’s TUNES IN TIMES SQUARE proceeds will be used towards the production of more original songs including a new album to teach swimming and water safety skills. These meaningful songs will then be available at no charge to serve the specific needs of schools, family centers, therapists, parents, and children and as an accessible resource for people everywhere.

Highlights of the Day will include: