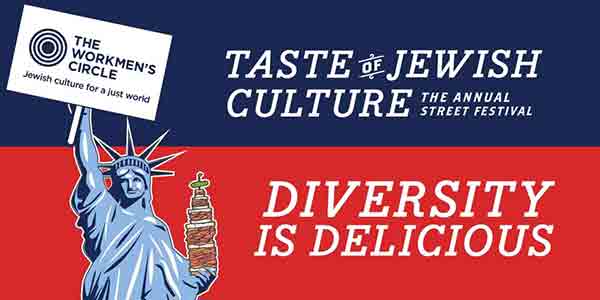 The Workmen’s Circle to Hold

(New York, N.Y.)—Declaring “diversity is delicious,” the Workmen’s Circle will serve up the fourth annual Taste of Jewish Culture Street Festival, featuring dozens of food purveyors putting their individual ethnic spins on traditional Jewish foods, on Sunday, June 18 from 11:00 AM to 6:00 PM. The event, on Sixth Avenue between 48th and 49th Streets, will include modern takes on traditional Jewish foods; dance; music; and family-friendly activities, including arts-and-crafts.

Launched in 2014, the Festival is part of the non-profit’s year-round Taste of Jewish Culture event series, which includes hands-on workshops, walking tours, tastings, film screenings, book discussions, and more. The Festivals have drawn upwards of 10,000 attendees during the day.

“New York City is a melting pot of different cultures and cuisines. This year we have seen our immigrant community under attack, and the fabric of our New York community weakened. Part of our response this year is to use our Festival as a showcase for the true multi-cultural flavor of New York City by declaring that this diversity is delicious and makes our City better and stronger,” said Ann Toback, Executive Director of the Workmen’s Circle. “Our participating restaurants—from myriad countries—will be putting a Jewish spin on their traditional dishes. It’s a unique opportunity to taste something innovative!”

Food won’t be the only thing on the menu: this year’s event will include performances by Frank London’s Klezmer Brass All Stars and the Klezmer-rock band, Golem, and engaging activities for youngsters.

The Workmen’s Circle has been cultivating a proudly progressive, diverse, and inclusive community rooted in Jewish culture, tradition and social justice activism for more than a century. Since our founding, the needs and priorities of our community have evolved and today’s Workmen’s Circle is responding in new and exciting ways. We seed and support a network of eight vibrant Jewish supplementary schools; create opportunities to connect to Jewish culture, including a global Yiddish language program; celebrate our rich heritage; host a summer camp, Camp Kinder Ring; and take action for social and economic justice. Together, as we always have, we are working to build a shenere un besere velt far ale—a better and more beautiful world for all.