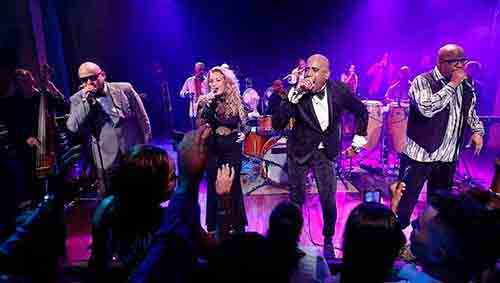 “A huge music machine with gears and cogs and cylinders all churning simultaneously.” ―NY Times

“One of the most influential forces ever in Afro-Cuban music.” ―Los Angeles Times

Lehman Center for the Performing Arts is proud to present the Exclusive NYC Appearance of Cuba’s legendary, Grammy-winning dance orchestra, LOS VAN VAN, who bring direct from Cuba their blend of Afro-Cuban, disco and funk back to Lehman Center on Saturday, August 26th, 2017 at 8pm. Heralded as Cuba’s greatest dance orchestra known worldwide for their iconic live performances, LOS VAN VAN features three of the late founder Juan Formell‘s children: leader and drummer/timbalero Samuel Formell, bassist Juan-Carlos Formell and the newest addition, the family’s youngest daughter, lead vocalist Vanessa Formell. For this special concert, the orchestra will also be joined by the legendary and most recognized Los Van Van vocalist Pedrito Calvo, who sang with the orchestra for their first forty years. Fans can expect to hear the group’s greatest hits along with the work from their more current releases including their soon to be released album Los Van Van son La Patria. Produced by Lehman Center and Ernesto Lago and Leo Tizol.

Lehman Center for the Performing Arts is on the campus of Lehman College/CUNY at 250 Bedford Park Boulevard West, Bronx, NY 10468. Tickets for LOS VAN VAN on Saturday, August 26th, 2017 at 8pm are $100*VIP, $60, $55, and $45 and can be purchased by calling the Lehman Center box office at 718-960-8833 (Monday through Friday, 10am–5pm and beginning at 12 noon on the day of the concert), or through online access at www.LehmanCenter.org. *VIP Reception: The HAVANA CAFÉ, Havana Club Rum and Lehman Center special VIP pre-concert wine, beer, Havana Club Rum & hors d’oeuvres reception will start at 6:30pm. VIP tickets include the reception and the best seats in the house. At the reception meet other patrons and the staff of Lehman Center. Sponsored by Havana Café Restaurant and Havana Club Puerto Rican Rum. Lehman Center is accessible by #4 or D train to Bedford Park Blvd. and is off the Saw Mill River Parkway and the Major Deegan Expressway. Low-cost on-site parking available for $5.

Los Van Van, nicknamed the “Cuban Music Train,” is regarded as one of the most influential bands in the history of 20th century Cuban popular music. Founded in 1969 by Juan Formell when he was 27 years old, the band pioneered Songo, a hybrid rhythm that blended Cuba’s native folkloric son music with the go-go of the 1970s and has electrified dance floors in Havana for over forty-five years. The band’s original members – Juan Formell (bandleader, bass player, and songwriter), Cesar “Pupy” Pedroso (piano, songwriter), and Jose Luis “Changuito” Quintana (drums and timbales) – were music conservatory trained from a young age and were fascinated with the soul, go-go and disco music that dominated U.S. radio. They named their dance band Los Van Van (which literally means “they go-go”) after the go-go fad, and pioneered the hybrid of son and go-go music – Songo – which can now be found throughout Latin jazz, pop, and world fusion. Songo also served as the title to their breakthrough 13th album in 1988 which was released internationally on Mango records.
Shortly after the band’s formation, they became the island’s favorite dance band and came to be known for their sophisticated, often satirical lyrics chronicling the realities of Cuban life, electric instrumentation and multi-layered percussion. In addition to the traditional Cuban charanga band lineup of violins and flutes, Los Van Van also featured multiple trombones and vocalists that, along with Changuito’s virtuosity on drums and timbales, really set them apart. Starting with the song “Pero a Mi Manera“ (1972) which introduced harmonies and arranging concepts new to Latin music, Formell and Pedroso wrote dance hit after hit, many of which have become standards of Cuban music. With the support of the Cuban government, the band toured tirelessly and recorded throughout the ’80s and ’90s. And if the genius of Songo wasn’t enough, they also developed the complex rhythmic style that became known as Timba that was adapted by other bands in the ‘90s. Los Van Van soon became one of the best-known Cuban groups in the world, maintaining a loyal fan base throughout Latin America, Europe and Japan propelled by hits like: “La Sandunguera,” “Anda, Ven y Muévete,” “Te Traigo” and “Yuya Martinez.”

In 1993 Changuito left the band and was replaced by Formell’s son Samuel who also proved to be an outstanding composer as evidenced by songs like “Te Pone La Cabeza Mala”, the title track of one of their best albums. Although American politics hindered their ability to break into the U.S. market, their popularity in the U.S. grew throughout the ’90s, and the band toured the U.S. for the first time in 1997, including a memorable concert at Lehman Center. In 1999, Los Van Van was honored with the GRAMMY® Award for Best Salsa Performance for their fifteenth album, Llegó…Van Van — Van Van is Here and in 2013, the Latin Recording Academy awarded Juan Formell with a special Grammy for a Lifetime Achievement of Artistic Excellence. With over 40 albums to their credit, Los Van Van’s 2015 album Homenaje A Juan Formell: La Fantasia, was 80% completed at the time of Juan Formell’s death in 2014 and was finished under the direction of his son Samuel with another son, Juan-Carlos Formell. The album’s release on Reyes Records in December, 2014 was on the 45th anniversary of the band’s founding and it features several of the band’s hit dance tracks refreshed with contemporary arrangements as well as many new songs including the widely popular “Somos Diferentes”, “Todo se Acabó” and “La Moda”.. Sony Music released it worldwide in 2016 and it earned a 2017 Grammy nomination for the Best Tropical Latin Album. The group’s most recent album Los Van Van son La Patria, is scheduled to be released on Cuba’s Engrem label later this summer.