Flushing Town Hall to Present US Debut of 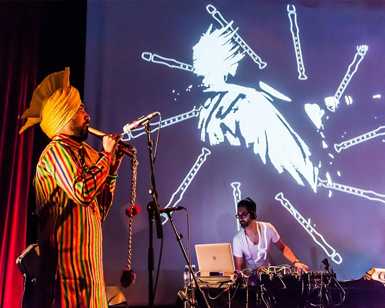 “We are delighted to be presenting PunjabTronix, a brand new, exciting contemporary music project where technology meets raw Punjabi folk music,” said Jaswinder Singh, Project Producer and Director of Asian Arts Agency. “This international collaboration between the exceptionally talented British and Indian artists is receiving global attention from audiences and promoters. I am looking forward to our US debut at Flushing Town Hall, and expect that audiences will have a great time enjoying this new music performance.”

You can get a taste of Punjabtronix in this video.

PunjabTronix is a new project produced and commissioned by Asian Arts Agency to respond to Reimagine India 2017, a cultural exchange program designed to develop creative collaborations between artists from England and India. PunjabTronix, which is funded by Reimagine India and is part of UK/India Year of Culture 2017 and the 70th anniversary celebrations of the Independence of India, is supported by Arts Council England and British Council.

The event features a collaboration between:

This season, Flushing Town Hall is opening its doors to teenagers – for FREE. Under the “Teen Access Program”, all 13- to 19-year-old boys and girls (whether a member or not) will be welcomed to attend any performance for free. The program is designed to appeal to students and help foster a greater love in the arts and culture. Tickets are on sale now at www.flushingtownhall.org.