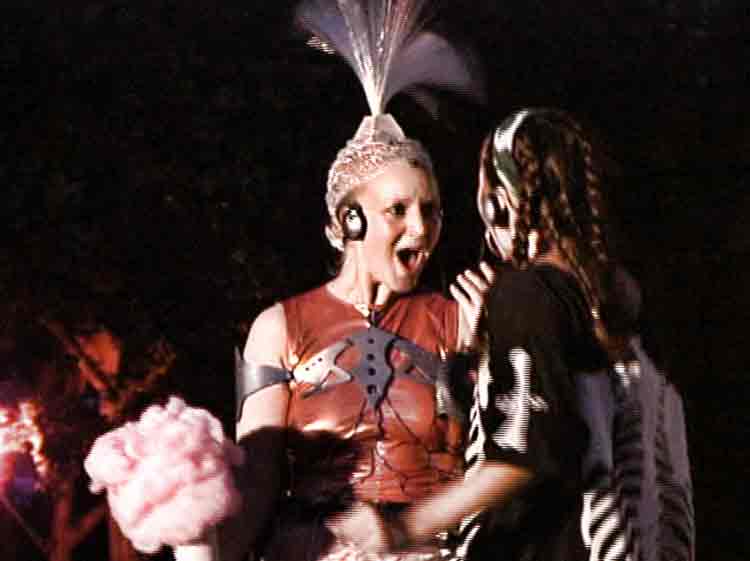 Presents the World Theatre Premiere of

A one-act opera, Fireworks is a comedy and social commentary seen through the eyes of an intergalactic de Toqueville (IT) who travels to Earth to investigate why colored lights erupt every year at the same time and from the same place on a planet orbiting a star in the heavens. Landing, the alien encounters a host of quintessential American characters including a geeky high school boy, a rebellious teenage girl, an actor trying to make a name for himself, a harried single mother, and an immigrant park groundskeeper, all getting ready for a Fourth of July celebration. The Alien has explored zillions of galaxies, but she’s never seen anything as brash, daring or infectious as this idea of democracy.

Commissioned and developed by Family Opera Initiative (FOI), Grethe Barrett Holby founding artistic and creative director, Fireworks was premiered by FOI and American Opera Projects in Fort Greene Park, Brooklyn on July 2, 2002 –  Independence Day following 9/11. The premiere was directed by Holby, conducted by Wendy Bobbit Cavett, and produced by Charles Jarden. Fifteen years later, the time is ripe to revisit and reassess the core values of our democracy. HOT’s in-theater premiere, directed by Susan Gonzalez and conducted by Steven Crawford, will do that.

Kitty Brazelton(Composer) rejoices in the keen expression she achieves by infusing vernacular American dialects into deep, complex structures.Fireworks was commissioned by Family Opera Initiative (FOI) and premiered by FOI and American Opera Projects in 2002. Her The Electric Ordo Virtutum premiered at Lincoln Center Festival 1998; and her full-length operaAnimal Tales with George Plimpton and Holby, commissioned by FOI/Ardea Arts, received its World Concert Premiere on March 25, 2017, co-produced by Ardea Arts and the Garden State Philharmonic, NJ. On April 7th, The Library of Congress and Opera America co-present the world premiere of Fierce Grace – Jeanett Rankin, a song cycle about the first woman elected to Congress,composed in part by Kitty Brazelton, with three other women composers. Brazelton is the recipient of two Opera America Opera Grants for Female Composers” program, supported by the Virginia B. Toulmin Foundation. Brazelton’s orchestral work includes Sleeping Out of Doors(1998); a piano concerto commissioned and premiered by conductor Kristjan Järvi’s Absolute Ensemble. Chamber music credits include the N.Y.S.C.A. cyber-punk fantasia 5 Dreams, marriage (premiered by her unique quartet, WHAT IS IT LIKE TO BE A BAT?), Manhattan Brass Quintet and the California EAR Unit. Brazelton has created electronic compositions for pianist Kathleen Supové, duos Twisted Tutu and Double Edge, choreographers Jody Oberfelder and Gina Gibney, Kitchen House Blend and Relâche.