To Present U.S. Premiere of

An Evening of New Works 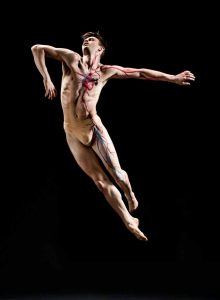 New York, NY (September 18, 2015), Eryc Taylor Dance will present the U.S. premiere of The Exhibit, a new immersive evening of dance featuring five contemporary dance works, running for six performances, October 15 – 18, 2015 at The Alchemical Theatre Laboratory, 104 W. 14th Street, The Exhibit features five works with multiple narratives, choreographed by Eryc Taylor in collaboration with company members. The pieces will be performed consecutively in one large performance space; the standing audience will be free to move about and follow the dancers to different areas of the room to witness the pieces from various perspectives.

The Box, choreographed by Eryc Taylor in collaboration with Jesus Olivera to a commissioned score by Salomon Lerner, features Caroline Brethenoux, Camille Workman and Jessica Arnoff.

The Time, choreographed by Eryc Taylor to a commissioned score by Salomon Lerner, is a solo featuring Timothy Patterson.

Eryc Taylor Dance was founded in 2006 with a mission to advance appreciation of dance by creating and presenting original performances, conducting master classes and workshops, and awarding grants to aspiring choreographers. ETD’s choreography seeks to find, explore and execute new points of view and combine varied styles of dance on and off pointe. ETD collaborates with digital artists and contemporary composers to fuse current technology with the classical compositions of music and dance, specializing in mapping and light projections to create ethereal extensions of the dancers and stimulate the visual senses. The Company has been home to over twenty New York City dancers since its founding. Every year, ETD provides three emerging New York-based choreographers with $1000 grants to fund the creation of a new piece and subsequently produces and hosts a work-in-progress show featuring each of the new works.

The Alchemical is an artist-run salon for experimental theater, music, fashion and performance, committed to developing the social potential of performance, and actively fostering discourse between artists and the public. The Alchemical is a true laboratory where artists can engage in the research and development of new work through rehearsal, teaching and performance. By providing affordable space to both emerging artists and established organizations who seek an intimate work environment, The Alchemical supports research into the contemporary meaning and nature of live performance. http://atlnyc.com/atlnyc.com/About_-_Alchemical_Theatre_Laboratory.html