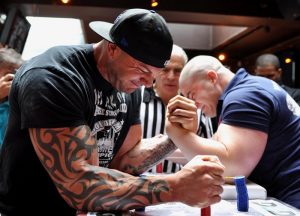 MEN AND WOMEN COME TO GRIPS IN NY FINAL SHOWDOWN!