Museum of the Moving Image to screen the director’s four features, including his newest,Queen of Earth, with Perry and star Elisabeth Moss in person 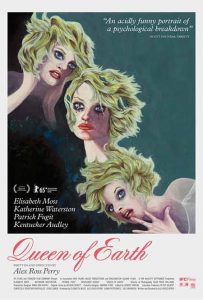 Astoria, New York (August 13, 2015)— Alex Ross Perry has become one of the most accomplished and provocative American independent filmmakers, with four disparate feature films that reinvent genres, are emotionally transgressive, feature scabrous dark humor, and evoke great cinema of the past while pushing ahead towards new forms. From August 22 through 25, 2015, Museum of the Moving Image will present all of his features, including a special preview screening of the new film Queen of Earth, with Perry and Moss in person, on August 25.

“Alex Ross Perry’s two most recent films feature unforgettable and vivid performances—most notably Elisabeth Moss’s daring portrayal of emotional despair in the astonishing Queen of Earth,” said Chief Curator David Schwartz. “The Museum is pleased to offer New Yorkers an opportunity to catch up on an impressive body of work by this unique emerging talent who has incorporated his love of cinema into his own original vision.”

The full schedule is included below. Except for Queen of Earth ($25 with discounts for Film Lover members and above), tickets are $12 ($9 for senior citizens and students / $6 for children 6–12 / free for members at the Film Lover level and above). Order tickets online at movingimage.us.

Screenings take place in either the Sumner M. Redstone Theater or the Celeste and Armand Bartos Screening Room atMuseum of the Moving Image, 36-01 35 Avenue in Astoria, New York. Unless otherwise noted, tickets for MOMI screenings are $12 adults ($9 seniors and students / $6 children 3–12) and free for Museum members at the Film Lover level and above. Advance tickets are available online at  http://movingimage.us. Ticket purchase includes same-day admission to the Museum’s galleries.

SATURDAY, AUGUST 22, 4:30 P.M.
Dir. Alex Ross Perry. 2009, 73 mins. 35mm. With Riley O’Bryan, Kate Lyn Sheil, Bruno Meyrick Jones. In his feature debut, Perry was loosely inspired by Thomas Pynchon’s Gravity’s Rainbow. Taking place just after World War II, the film follows the shambling young soldier Tyrone S. as he wanders through the forest looking for German V2 rockets and encounters a number of inexplicably figures, including an eyepatch-wearing Englishman, a garrulous octopus, and the girlfriend he left behind to join the army.

SUNDAY, AUGUST 23, 3:00 P.M.
Dir. Alex Ross Perry. 2011, 83 mins. 35mm. With Carlen Altman, Alex Ross Perry. Having recently broken up with her boyfriend and former professor, aspiring TV weathergirl JR calls on her estranged younger brother Colin to help retrieve her possessions at her ex’s apartment. What follows is one of the most uncomfortable road movies ever, as the two equally despicable characters incessantly pick on, undercut, and attack one another. “Perry gives a harsh, sarcastic twist to the intimate rivalry of siblings…. [He] directs these uproarious rapid-fire flareups with exquisite comic timing and incisive comic framing,” wrote Richard Brody in The New Yorker.

Queen of Earth
With Elisabeth Moss and Alex Ross Perry in person
TUESDAY, AUGUST 25, 7:30 P.M.
Dir. Alex Ross Perry. 90 mins. With Elisabeth Moss, Patrick Fugit, Katherine Waterson. Catherine (played in what Variety calls “an utterly fearless central performance by Elisabeth Moss”) has entered a particularly dark period in her life. Following her father’s death and a bad breakup with her longtime boyfriend, she decides to spend a week recuperating in the lake house of her best friend, Virginia. However, fissures between the two women begin to appear, sending Catherine into a downward spiral of delusion and madness. As Scott Foundas points out in his Variety review, ”Perry is working in a style that seems equally influenced by doppelganger narratives like Bergman’s Persona  and Brian De Palma’s Sisters.
Tickets: $25 public/$15 Museum members at the Film Lover level or above/Free for Silver Screen members and above.