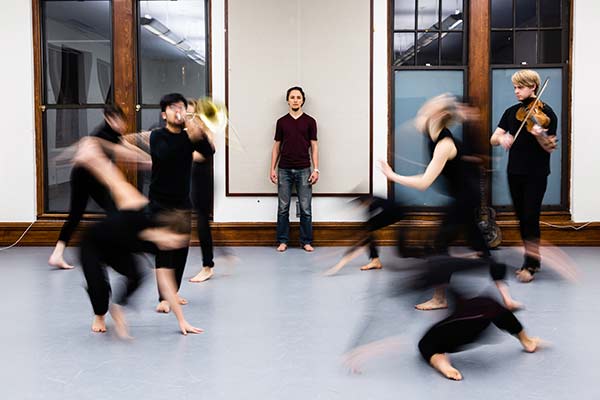 ECHOensemble presents the World Premiere of One by Brooklyn composer Jonah Udall at Dixon Place, 161A Chrystie Street, New York, NY 10002. Performances: Sunday, January 27 at 7pm and Monday, January 28 at 9pm. Tickets are $15 in advance and $18 at the door ($12 in advance and $15 at the door for students, seniors, idNYC) and are available athttps://web.ovationtix.com/trs/pr/1003066.

One is an evening-length work of sound and movement. Together, dancers and musicians become resonant bodies, instruments of space, blurring the boundaries of medium. The performers engage in a shared practice, conversing with space and time through repetition and natural evolution. This premiere comes out of two years of organic, physical research and exploration.

ECHOensemble creates evolving architecture of movement and sound. Directed by Jonah Udall, their work is rooted in an awareness-based practice called SHIFT, influenced by Steve Reich’s “process music” and Mary Overlie’s Viewpoints method. Nine dancers and musicians discover shared worlds, where their singular voices both ring out and blend together as one.

An echo is created, repeated and transformed in a continuous interplay with the space it occupies.

“As musicians and dancers, we have gathered to develop a practice. Our objective was to find the intersection between movement and sound, where resonance and vibrations exist and inform the art,” said Mr. Udall. “The Viewpoints method has given us all the freedom to explore, allowing the spatial construction of an architectural fabric of spontaneous composition.”

JONAH UDALL creates work in the vast territory between improvisation and composition. As a guitarist and director, he seeks new acoustic sounds, explores repetition as humanism, and borrows ideas from unexpected, mundane sources. He tours internationally with chamber-jazz trio Sound Underground. His collaborations with movement artists have included commissions for a Merce Cunningham MinEvent, “The Roof” video series, and Triskelion Arts’ Never Before, Never Again festival. Jonah grew up in Berkeley, California, steeped in folk music from around the world.

NOAH BECKER is a nationally- and internationally-touring alto saxophonist, clarinetist and composer. His recent projects include a research commission from the New York Public Library premiered at Lincoln Center about the modern-day relevance of the Jewish immigrant experience; and a new solo work with electronics TRUMP: An Unspoken Truth.

SEAN BREKKE is a violist and Brooklyn native. He received his bachelor’s degree from SUNY Purchase in 2016, studying viola with Daniel Farina. He has collaborated with many composers, creating new works for solo viola. Sean is a violin and viola teacher at The Brooklyn Waldorf and a violist with the String Orchestra of Brooklyn.

DANI COLE is a movement artist and activist. Her work has been shown through the 92nd St. Y, Actor’s Fund Arts Center, Access Theatre, Marymount Manhattan College, and Thomas Dale High School. She has traveled to South Africa to collaborate on advocacy for decolonizing education, and is an ambassador for the Foundation for Holocaust Education Projects.

LIANA KLEINMAN is a dancer, choreographer and filmmaker from Los Angeles, CA. She dances with H.T. Chen & Dancers, ARIM Dance and Salvatore LaRussa Dance Theater. She is also a co-creator and producer of The Roof, a collaborative film and performance series featuring New York-based choreographers and composers.

ERIN LANDERS is a dancer, choreographer, and co-director of the Hudson Valley-based repertory company A-Y/dancers. Her work has been presented at the Palace of Fine Arts in San Francisco, Dance Theater Lab at Purchase College, and the Trust in Lancaster, PA. She grew up immersed in folk and social dance forms including Zimbabwean, Balkan, and Irish.

KALUN LEUNG is a Canadian musician and composer. As a trombonist and improviser, he is a member of Little Suns, Zlatne Uste, Eco-Music Big Band, people.of.earth and So Wrong it’s Right. He creates multi-disciplinary works exploring audience interaction, social commentary, and technology, which have appeared at National Sawdust and Lincoln Center.

MARY MCGRATH is a movement artist from the scenic Berkshires of Western Massachusetts in the small town of Lenox. She has performed in Nick Cave’s “The Let Down” at the Park Avenue Armory in 2018, and a reconstruction of Yvonne Rainer’s “Continuous Project Altered Daily.” She is a graduate of the dance conservatory at SUNY Purchase.

ALLISON SEXTON is a queer dancer, mover and maker from the beautiful, yet problematic, state of North Carolina. She is a graduate of Marymount Manhattan College, and has studied at the American Dance Festival with Jennifer Nugent and Shayla-Vie Jenkins. You can find her running around as the Operations Manager at Gibney 890 or dancing on her roof.

An artistic incubator since 1986, Dixon Place is a Bessie and Obie Award-winning non-profit institution committed to supporting the creative process by presenting original works of theater, dance, music, puppetry, circus arts, literature and visual art at all stages of development.  Presenting over 1000 creators a year, this local haven inspires and encourages diverse artists of all stripes and callings to take risks, generate new ideas and consummate new practices.  Many artists, such as Blue Man Group, John Leguizamo, Lisa Kron, David Cale, David Drake, Deb Margolin and Reno, began their careers at DP. In addition to emerging artists, Dixon Place has been privileged to present established artists such as Mac Wellman, Holly Hughes, Justin Bond, Karen Finley, Kate Clinton and Martha Wainwright.  After spawning a salon in her Paris apartment in 1985, founding Artistic Director Ellie Covan pioneered the institution in her NYC living room for 23 years.

Covan was a recipient of a Bessie, a New York Dance and Performance Award and a Bax10 Award for her service to the community. Dixon Place received two Obie Awards, and an Edwin Booth Award for Excellence in Theater. Dixon Place has organically developed and expanded into a leading professional, state-of-the-art facility for artistic expression. www.dixonplace.org