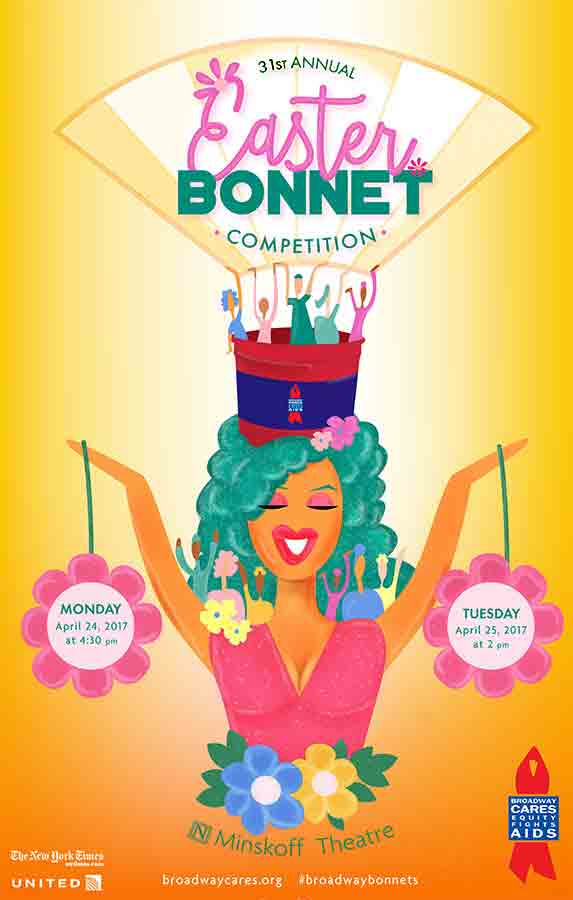 Performers from Broadway, Off-Broadway and national touring companies will share unforgettable original skits, songs and dances, as well as their unique bonnet designs, for two delightful afternoons at the Minskoff Theatre, home to Disney’s The Lion King. Awards will be presented to the best presentation and best bonnet design across both performances and top fundraisers from the preceding six weeks.

Casts, crews and volunteers at Broadway, Off-Broadway and national touring productions around the country will take their places at theatre exits to accept donations with Broadway Cares’ iconic red buckets in hand, beginning March 10.

Twenty-eight Broadway and Off-Broadway shows have begun their appeals from the stage: Aladdin; Amélie; Avenue Q; Beautiful – The Carole King Musical; The Book of Mormon; A Bronx Tale; Cagney; Cats; Chicago; Dear Evan Hansen; Hamilton; In Transit; Kinky Boots; The Lion King; Natasha, Pierre & the Great Comet of 1812; On Your Feet!; Paramour; The Phantom of the Opera; The Play That Goes Wrong; The Price; School of Rock – The Musical; Significant Other; Sunday in the Park with George; Sunset Boulevard; Sweat; The View UpStairs; Waitress and Wicked, as well as more than a dozen national tours. Last year, 58 Broadway, Off-Broadway and national tours raised $5.5 million during the Easter Bonnet Competition fundraising.

This year’s special guests and celebrity judges at the April 24 and 25 performances will be announced later this spring.