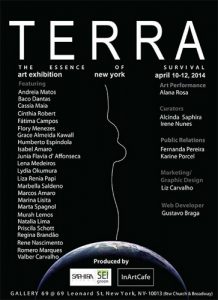 Earth-Inspired Art Exhibition to Be Held in Tribeca

Through the work of more than 20 artists, TERRA – The Essence of Survival (Terra means earth in Portuguese) will show the beauty and the challenges of the environment. The purpose is to make the public reflect about the impact of their attitudes and raise awareness about the importance of preserving the planet.

They will display nature-inspired paintings, sculptures and photographs. “Although their work is quite diverse, the link that unites them is their concern and great commitment to the planet and the environment”, said Alcinda Saphira, one of the curator.

The exhibition TERRA – The Essence of Survival is curated by Alcinda Saphira and Irene Nunes and produced by Saphira Studios and Inartcafe.