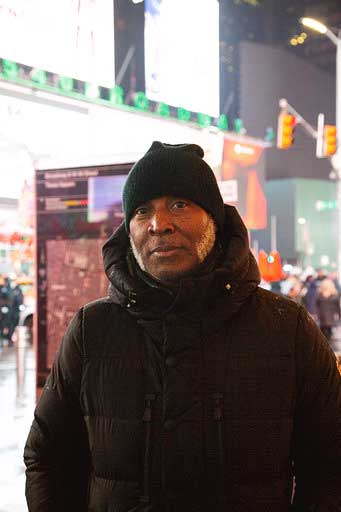 Drive-by Remix (2017) – a new version of Cave’s 2011 film Drive-by – features Cave’s Soundsuits in motion. Colorful textiles spin exuberantly across the screen as the Soundsuits somersault and roll, fall from the sky, bounce on pogo sticks, and dance across an endless white field. Amidst the energetic movement, a figure adorned with a stop sign appears, conveying an underlying sense of urgency in the jubilant expression of freedom. In its Times Square debut, the work is reorganized with amplified colors to make use of this unique location’s identity as an American cultural crossroads.

“Times Square is a living representation of America as a melting pot,” said Nick Cave. “My hope is that by turning our collective gaze up to the city’s sky and taking in the Soundsuits in all their limitless exuberance, we can let some of that positivity seep into our own skins.”

“Nick Cave is one of the great artists of our time, and it’s a privilege to share his work with the public in Times Square,” said Andrew Dinwiddie, Acting Director of Times Square Arts. “This complex video braids three strands that are crucial to an understanding of this place: the celebration of diverse cultures, a history of social activism, and—particularly in the New Year season—the beautiful expression of collective joy in the public sphere.”

Nick Cave (b. 1959, Fulton, MO, lives and works in Chicago, IL) is an artist, educator, and foremost a messenger, working between the visual and performing arts through a wide range of mediums including sculpture, installation, video, sound, and performance.

Cave’s work is part of many public collections, including the Brooklyn Museum; Crystal Bridges Museum of American Art; the Detroit Institute of Arts; the High Museum of Art; the Hirshhorn Museum and Sculpture Garden; The Museum of Modern Art, New York; the Museum of Fine Arts, Boston; the Museum of Fine Arts, Houston; the Orlando Museum of Art; the San Francisco Museum of Modern Art; and the Baltimore Museum of Art, among others. Cave has received several prestigious awards including: The Art in Embassies International Medal of Arts Honoree (2017), the Americans for the Arts Public Art Network Year in Review Award (2014), the Joan Mitchell Foundation Award (2008), Artadia Award (2006), the Joyce Award (2006), Creative Capital Grants (2002, 2004 and 2005), and the Louis Comfort Tiffany Foundation Award (2001). Cave, who received his MFA at the Cranbrook Academy of Art, is Professor and Chairman of the Fashion Department at the School of the Art Institute of Chicago. nickcaveart.com

Jack Shainman Gallery was founded in 1984 in Washington, DC, by Jack Shainman and Claude Simard. Soon after opening, the gallery relocated to New York City occupying a space in the East Village before moving to 560 Broadway in Soho and then to its current location at 513 West 20th Street in Chelsea in 1997. In 2013 the gallery added two additional exhibition spaces, one in Chelsea at 524 West 24th Street, the other a 30,000 square foot schoolhouse in Kinderhook, New York.

The focus of the gallery since its inception has been to exhibit, represent and champion artists from around the world, in particular artists from Africa, East Asia, and North America, by mounting major exhibitions of their work in the gallery, presenting artworks at important fairs, securing museum exhibitions and publishing major catalogues and scholarly essays. The gallery is a member of the Art Dealers Association of America and presents approximately twelve exhibitions a year, as well as participating in major art fairs including Art Basel Miami Beach, The Armory Show, Frieze New York, Art Basel, and Frieze London. jackshainman.com