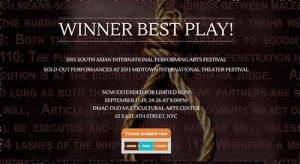 Death of a Persian Prince

“Mr. Moss’ play grabs the psyche and soul of the audience and does not let go. Death of the Persian Prince remains one of the most riveting and life-altering plays in the current canon of LGBTQ theatre.” – David Roberts, Theatre Reviews Ltd

“A play of substance and heart that deserves recognition and the opportunity to be more widely seen.” – Howard Miller, Upstage- Downstage

Each year, hundreds of gay Iranian men choose to change their gender through sexual reassignment surgery.

If they don’t, it’s legal to execute them.

This is their story.

DEATH OF THE PERSIAN PRINCE

Written and Directed By Dewey Moss

NEW YORK, NY, August 26, 2015 – Following a piercing expose in The Advocate and two critically-acclaimed, sold-out runs in The South Asian International Performing Arts Festival (where it was named Best Play) and The Midtown International Theater Festival, DMAC-Duo Multicultural Arts Center in association with DMoss Productions will present a limited return engagement of the world premiere of DEATH OF THE PERSIAN PRINCE, a new play that dramatizes the real-life story of thousands of gay Iranians who have changed genders to avoid execution by the Iranian government.

Written and directed by Dewey Moss (The Crusade of Connor Stephens, A Normal Life), DEATH OF THE PERSIAN PRINCE is a haunting tale about the power of the human spirit.

Samantha is an Iranian woman living in New York. James is a veteran of the Iraq war. Late one night, in the middle of a heated argument, James leaves and Samantha finds herself alone. Suddenly, there’s a knock at the door. Someone from Samantha’s homeland has arrived unexpectedly. Fueled by a barrage of threats that unearth shattering confessions of unimaginable terror, the story of James, Samantha and the stranger takes an unexpected turn, leading to a stunning ending that proves nothing is as it seems.

“Sexual reassignment surgery is legal in Iran; however, homosexuality is forbidden and in most cases for males, punishable by death,” according to a 2014 report by the BBC. “There is no reliable information on the number of gender reassignment operations carried out in Iran. But one doctor from an Iranian hospital told the BBC that he alone carries out more than 200 such operations every year.”

DEATH OF THE PERSIAN PRINCE will be presented at The DMAC-Duo Multicultural Arts Center, located 62 East 4th Street in New York City. The play will be presented on Thursdays, Fridays and Saturdays at 8pm from September 17 through September 26, 2015.

All seats for this limited engagement are $20. Tickets are available by visiting http://deathofthepersianprince.brownpapertickets.com/

The Story That Inspired The Play

Sexual reassignment surgery is legal in Iran; however, homosexuality is forbidden and in most cases for males, punishable by death. A growing trend is for gay men to have sex changes in order to avoid legal execution.

It’s not official government policy to force gay men or women to undergo gender reassignment but the pressure can be intense. In the 1980’s the founder of the Islamic Republic, Ayatollah Khomeini, issued a fatwa allowing gender reassignment surgery – apparently after being moved by a meeting with a woman who said she was trapped in a man’s body.

A psychologist at a state-run clinic in Iran says some gay people now end up being pushed towards surgery. Doctors are told to tell gay men and women that they are “sick” and need treatment, she says. They usually refer them to clerics who tell them to strengthen their faith by saying their daily prayers properly.

Supporters of the government’s policy argue that transgender Iranians are given help to lead fulfilling lives, and have more freedom than in many other countries. But the concern is that gender reassignment surgery is being offered to people who are not transgender, but homosexual, and may lack the information to know the difference.

There is no reliable information on the number of gender reassignment operations carried out in Iran. Khabaronline, a pro-government news agency, reports the numbers rising from 170 in 2006 to 370 in 2010. But one doctor from an Iranian hospital told the BBC that he alone carries out more than 200 such operations every year. Furthermore, additional studies claim that 45% of people receiving the surgery were not transgender, but rather gay or lesbian told to have the surgery to avoid legal persecution.

Dewey Moss is an award-winning director, writer, and actor whose performance career has spanned Broadway shows, concert appearances, film/TV work, and opera. As a writer and director, his debut feature film A Normal Life won critical acclaim in film festivals worldwide and is currently in distribution. His screenplay All the Way from Arp, Texas is currently in pre-production. His play The Crusade of Connor Stephens that shows a gay family dealing with a school shooting and the consequences of radicalized religion is currently in pre-production for an Off-Broadway run.

Moss recently made his Carnegie Hall debut as both singer and director when he performed the operaPuppet by Christian McLeer (a solo piece written specifically for Moss) and directed the world premiere of William Bolcom’s Barnyard Boogaloo.  Other directorial credits include The Normal Heart, Guys n’ Dolls, Holy Ghosts, Angels in America, Love! Valour! Compassion!, Die Fledermaus, Something’s Afoot, The Crusade of Connor Stephens, Judevine, The Old Maid and the Thief and Surviving Laughter, a finalist in the Kennedy Center’s American College Theater Festival.

As a Creative Director for advertising firms, Dewey has written and produced/directed numerous commercials, industrials, and webisodes, many of which have been award-winning.

Originally from Fort Worth, Texas, Moss teaches acting and voice through his private New York City studio, DMoss Studios, and is the author of the acting handbook Learning the Art of Imperfection.

About The DMAC-Duo Multicultural Arts Center

DMAC- Duo Multicultural Arts Center offers multicultural programming on three floors at 62 East 4th Street through [email protected] which  has commissioned/presented over 21 musicals including the cult long running cult hits BORN TO RUMBA!  and CHEZ GARBO. Five of these productions have been recorded and released on CD.  The IN A DIFFERENT LIGHT SERIES,which showcases Latino actors in plays by leading world playwrights, in roles in which they are seldom cast. Productions have included  BENT, THE NORMAL HEART, THE BLUE ROOM, BEIRUT, BETRAYAL, EASTERN STANDARD.