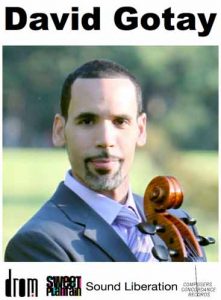 David Gotay (May 20, 1972 – April 3, 2015) was an amazing cellist, composer, rapper, and producer from the Bronx who passed away in April, 2015 at the age of 42, following a long battle with kidney cancer. David’s numerous colleagues, fans, friends, and his extraordinary family are all deeply saddened by the loss of this great artist and individual. In 1996, David started, together with Gene Pritsker, the eclectic chamber ensemble / band Sound Liberation, which has released four CDs and performed numerous concerts internationally. David was also a founding member of Sweet Plantain, a string quartet whose mission is to give voice to a contemporary, urban, Latino sound. David’s wide-ranging accomplishments included performances at Carnegie Hall, Alice Tully Hall, Avery Fisher Hall and The White House. He appeared on ‘Saturday Night Live,’ ‘MTV’s Unlugged,’ and ‘The Jimmy Fallon Show’ with Florence and the Machine as well as Jim James; ‘The Late Show With David Letterman,’ with Paloma Faith, and ‘The Last Play at Shea’ with Billy Joel. He collaborated with such artists as Jay Z, Alicia Keys, Nas, Billy Joel, Aretha Franklin, k.d. lang, David Sanborn, Billy Ocean, and Little Jimmy Scott. Over the years, David performed on many Composers Concordance concerts, including several premieres of his own distinctive compositions. As recently as January of 2015, David devoted his limited time and abundant talent to produce the live recording of CompCord’s event ‘Sweet Concordant Strings,’ including the premiere of his own string quartet composition entitled ‘Nostalgia.’

“For the past 30 years, Composers Concordance has been a booster for local composers, through both its concerts across the city and a record label.” -The Wall Street Journal. “Enterprising new music organization” -The New York Times. Staying in rotation for thirty years in NYC is a rare feat. In the case of a new music presenting organization, it requires not only diligence and cognizance of achievements of the past, but also an ethic of keeping one’s ear to the ground for emerging stylistic and technological developments, as well as talented new composers on the scene. Composers Concordance strives to present contemporary music in innovative ways, with an emphasis on thematic programming. It has also created a new record label, Composers Concordance Records, with distribution by Naxos. Directors Gene Pritsker and Dan Cooper co-curate the programs, and lead the CompCord Ensemble, Chamber Orchestra, String Orchestra, and Big Band. Associate Directors for the 2015-16 season are Milica Paranosic, Peter Jarvis, Svjetlana Bukvich, and Melissa Grey. Composers Concordance’s overriding vision is to promote contemporary music, composers, and new works as a rightful and respected part of society. Good music, performed and recorded well, pushing the boundaries of sound and composition.