The Cathedral of St. John the Divine Presents

The Cathedral of St. John the Divine
1047 Amsterdam Avenue (at 112th Street) 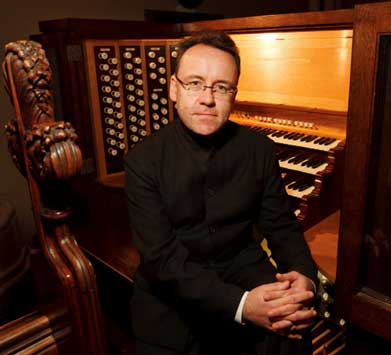 International concert organist and composer David Briggs will perform his transcription of Gustav Mahler’s Symphony No. 5 on Tuesday, January 16 at 7:30 p.m. at the Cathedral of St. John the Divine, 1047 Amsterdam Avenue (at 112th Street), Manhattan as the second concert of Great Organ: A Recital Series, part of the 2017–2018 season of Great Music in a Great Space.

The Cathedral of St. John the Divine is pleased to have recently appointed Mr. Briggs, known worldwide as an outstanding and innovative musician, as the first-ever organist to be named Artist in Residence. Mr. Briggs, who devotes around a third of his career to playing transcriptions, has been at the vanguard of creating a “new” repertoire for the pipe organ, frequently performing orchestral music by composers like Mahler who wrote no music for solo organ. Of his approach to arranging and playing these works, he says, “The central and imperative crux of any transcription is that the music has to be reinvented and not just copied. My own feeling is that intrinsically great music can cross instrumental boundaries with compelling ease.”

Gustav Mahler’s Symphony No. 5, written between 1901–2 and published in 1904, captivated Mr. Briggs from an early age. As a 14-year-old violist in the National Youth Orchestra of Great Britain, he became “immediately addicted to the unique harmonic language, the larger-than-life orchestration, and, above all, the intense emotional impact of this music. I learnt it from within,” he says, “and it affected me so deeply I couldn’t sleep.” January’s performance will be the third Mahler work that Mr. Briggs has performed at St. John the Divine; he previously premiered his transcriptions of Symphony No. 2 and Symphony No. 8 at the cathedral in April 2013 and April 2016, respectively.

Tickets are $25. For more information, please visit this website.