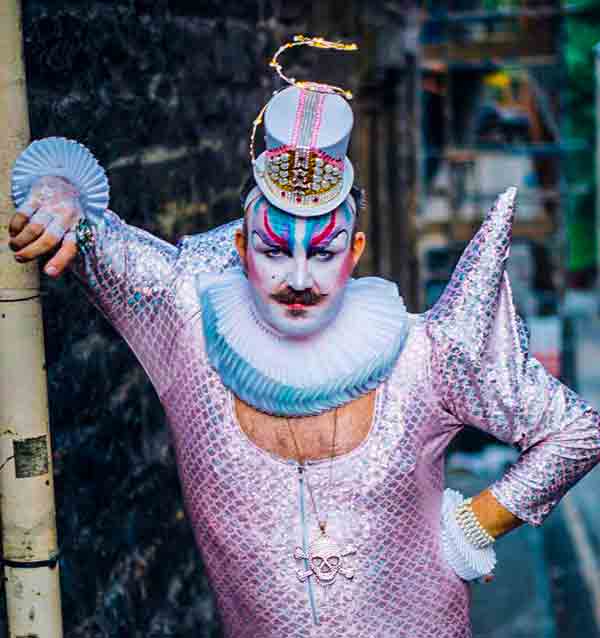 FRIGID New York @ Horse Trade will present a limited encore run of Dandy Darkly’s Myth Mouth!written and performed by Dandy Darkly and directed by Ian Bjorklund, at UNDER St. Marks (94 St. Marks Place between 1st Avenue and Avenue A) with performances on Friday, October 27 at 10:30pm, Sunday, October 29 at 7pm, and Monday, October 30 at 7pm. Tickets ($20) may be purchased in advance at www.FRIGIDnewyork.info.

Dandy Darkly is New York City’s cult storytelling sensation. He is an award winning, alt-cabaret performance artist who has astonished audiences and critics at Fringe festivals and theaters on both sides of the Atlantic. His current show Dandy Darkly’s Myth Mouth! was nominated for THREE 2017 New York Innovative Theater Awards (Outstanding Solo Performance, Outstanding Original Music and Outstanding Performance Art Piece) and recently won Best of the Fringe at the esteemed San Francisco Fringe Festival. Dandy’s headed back to UNDER St. Marks for an encore run of Myth Mouth! before concluding his first ever US national tour.

Dandy delivers his utterly unique tales of sex and death with a breathless patter that shifts seamlessly from bitchy to bittersweet, each story revealing a surprisingly elegant critique on modern life. Themes of his past shows have included misogyny, guns, gentrification, political correctness and more.

Dandy regales his hilarious tales of sex and death alongside a nonstop soundscape of prerecorded music composed by long time musical collaborators Adam Tendler (piano), Bryce Edwards (guitar, bass) and Rachel Blumberg (percussion), The show is peppered with eerie and eclectic sound effects to create an utterly immersive storytelling experience that must be seen to be believed. Ian Bjorklund returns as director.