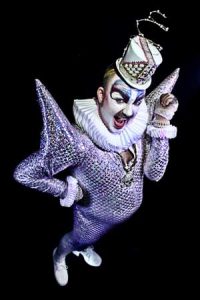 Smash Hit Of The Edinburgh Fringe!

This October “New York City’s King of Halloween” (Out Magazine) returns to UNDER St. Marks with the New York Premiere of his latest show, direct from a smash run at the Edinburgh Festival Fringe.

Dandy Darkly is an award winning storyteller, satirist and critically acclaimed cabaret artist. His work has been described as “fantastical fairytale horror, equal parts Tennessee Williams, Edgar Allen Poe and Bruce La Bruce” (Time Out) and “a cross between Pam Ayres, Liberace and Tales from the Crypt.” (The Scotsman) This “decidedly wicked storyteller” (New York Times) is “simply one of the most thoughtful, hilarious and harrowing queer talents at work today.” (Scotsgay Magazine). Dandy Darkly’s masterful and mesmerizing style of storytelling has astounded critics and audiences at festivals and theaters across the globe. He is the glittery, ghastly jewel of the East Village with four years of critically acclaimed, satirical solo shows tackling gun violence, misogyny, gentrification and political correctness. Dandy Darkly’s delirious delivery shifts seamlessly from camp panache and hilariously caustic bitchery into bittersweet poignancy and reflective rumination upon modern life. Dandy Darkly must be seen to be believed. To learn more about Dandy Darkly go to www.dandydarkly.com or follow him on Twitter at @dandydarkly.

FRIGID New York @ Horse Trade is a theater development group with a focus on new work that produces a massive quantity of stimulating downtown theater every season. FRIGID’s Resident Artist Program offers a home to a select group of Independent theater artists, pooling together a great deal of talent and energy. FRIGID New York grew out of the annual FRIGID Festival, the first and only festival of its kind in New York City to offer artists 100% of their box office proceeds, and Horse Trade Theater Group, a self-sustaining theater development and management group.