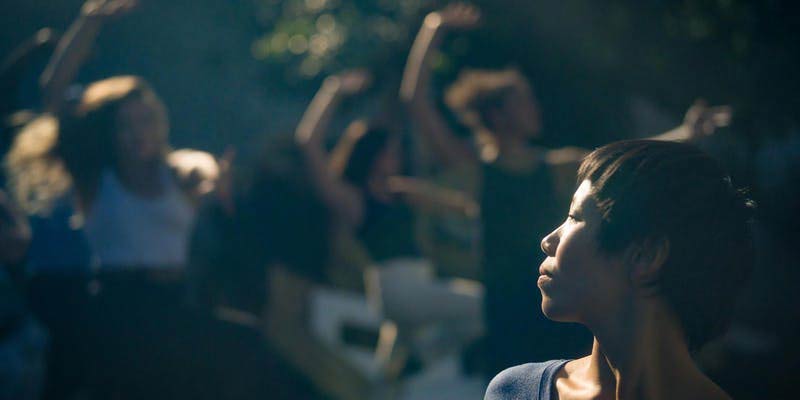 The CUNY Dance Initiative and John Jay College, in collaboration with Mari Meade Dance Collective/MMDC, present the World Premiere of immigration stories on Friday, September 13, 2019 at 7:30pm at the Gerald W. Lynch Theater at John Jay College, 524 W. 59th Street, NYC. Tickets are $20 ($15 for students and seniors) and can be purchased online here… or at the door the night of the performance.

immigration stories, a series of dances based on true experiences about relocating to the United States, opens up the vastly different paths people take to come this country. What began with a frustrating phone call for choreographer Mari Meade to U.S. Citizenship and Immigration Services has evolved into a full evening of personal stories, music and dance. From a young man who was born in Germany and lived in Ghana before making his way to New York, to a Russian woman who moved to Florida as a teenager, these individual stories expand the conversation around immigration in this highly politicized time. Weaving together interviews with original compositions by Rosana Caban, Domenico Curcio, and Eran Sabo, with additional music by Chino Amobi, immigration stories combines words and movement to question assumptions around cultural identity and what being “American” might really mean.

Mari Meade is an educator, choreographer, and the artistic director of Mari Meade Dance Collective / MMDC. Meade has received the New York Choreographic Institute (an affiliate of New York City Ballet), UNCSA Development Residency, the Kenan Fellowship at Lincoln Center Education and was an Artist in Residence at Chez Bushwick, Triskelion Arts, CUNY Dance Initiative, and Lake Studios Berlin. She has shown work at Clark Theatre at Lincoln Center; Danspace; Judson Memorial Church; Joe’s Pub; Battery Dance Festival; Triskelion Arts; ChopShop: Bodies of Work (WA); New Orleans Fringe Festival; Asheville Fringe Festival; Baltimore Dance Invitational; Lake Studios Berlin; Katlehong Arts Center (South Africa). She was awarded a Brooklyn Arts Council regrant in 2010, and a “New Work” and Su Casa grant from Queens Council on the Arts in 2019. Mari Meade is also a board member of the Kenan Institute for the Arts and the associate director of the UNCSA’s Choreographic Institute. She was recently commissioned by Amalgamate Dance Company, One Day Dance, and CounterPointe. She is a teaching artist for New York City Ballet and Dancing Classrooms. She is a graduate of UNC School of the Arts.

This project is made possible in part by the Queens Council on the Arts with public funds from the New York City Department of Cultural Affairs in partnership with the City Council.

MMDC’s residency and performance at John Jay College is part of the CUNY Dance Initiative (CDI), a program that opens the doors of CUNY campuses to professional choreographers and dance companies. CDI receives major support from the Howard Gilman Foundation and the Mertz Gilmore Foundation. Additional support is provided by the Jerome Robbins Foundation, the SHS Foundation, the Harkness Foundation for Dance, and Dance NYC’s New York City Dance Space Subsidy Program, made possible by the Andrew W. Mellon Foundation. CDI is spearheaded and administered by the Kupferberg Center for the Arts at Queens College.
www.cuny.edu/danceinitiative

Cultural, informational and visual arts presentations at John Jay College are made possible in part with funds allocated by Council Member Helen Rosenthal and the New York City Council.