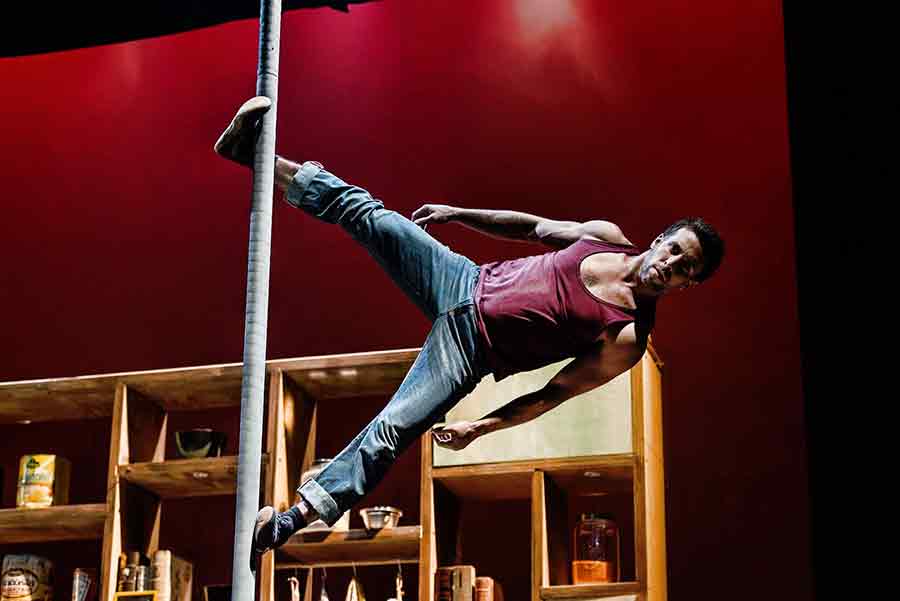 New York, NY, February 6, 2017 – Cuisine & Confessions, an entertainment combining culinary arts with circus high jinx, will have its New York premiere April 11 – 16, 2017, at NYU Skirball Center.Cuisine & Confessions is the creation of the Montreal-based circus The 7 Fingers (Les 7 Doigts), the company behind the Tony Award-winning Pippin. Cuisine & Confessions is part of the second annualTilt Kids Festival, a cultural event for families presented by the Cultural Services of the French Embassy and the French Institute Alliance Française (FIAF).

Life happens in the kitchen. In Cuisine & Confessions, the stage becomes a giant kitchen where late night confessionals over tea and a jar of Nutella quickly turn into elaborately choreographed family meals. Circus performers recreate stories while cooking actual meals and offering them up to the audience. Secrets are exchanged, lessons are learned and bonds are forged, reinforced by our most visceral of senses: taste.

Each performer has their moment in the spotlight, leading audiences through personal stories. Directors Shana Carroll and Sébastien Soldevila wrote the show by mining true stories from the cast members’ lives and weaving together snippets of narratives and themes. Fellow performers are buzzing nearby; grating cheese, breaking eggs, chopping, stirring – occasionally jumping in with supporting moves. All food preparation happens live on stage, at times with audience assistance. From the moment the house opens to the final bow, there is always something cooking.

The 7 Fingers (Les 7 Doigts), based in Montreal, was created in 2002 with the goal of making circus a transformative experience for audiences, and nurturing new generations of circus artists. The company is made up of 200 artists, administrators and technicians, and presents roughly 1,000 performances a year — both artistic collaborations and signature shows. The 7 Fingers strive to reach the universal, extraordinary, indefinable, visceral, and intimate worlds in each human being.

The company’s credits include the New York productions of Traces, which ran for one year and is currently touring; the Tony Award-winning revival of Pippin; and direction of the immersive Queen of the Night, as well as two appearances on “America’s Got Talent” and direction of the first segment of the opening ceremony of Sotchi Olympics. http://www.7doigts.com/

Launched last season to great acclaim, Tilt Kids Festival returns this spring with five world premieres and four U.S. debuts from March 4 through April 16 at venues throughout New York City. Co-produced by the French Institute Alliance Française (FIAF) and the Cultural Services of the French Embassy, the festival presents philosophy and dance, circus and visual art, music and theater, in a series of forward-thinking events designed to stimulate and inspire the audiences of today and tomorrow. www.tiltkidsfestival.org