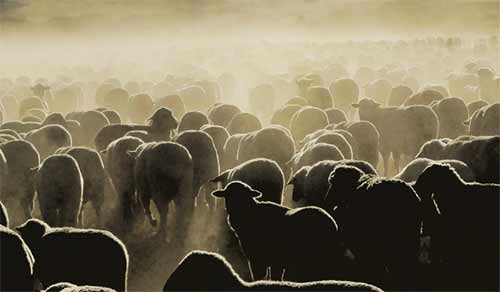 Times Square Arts presents a visual lullaby for the city in filmmaker and theatrical video artist Tal Yarden’s Counting Sheep on Times Square’s electronic billboards from 11:57 pm to midnight throughout December. This project is a part of Midnight Moment, a monthly presentation by the Times Square Advertising Coalition (TSAC) and Times Square Arts.

For the year’s end, Counting Sheep shepherds us into a soothing American pastiche of expansive Wyoming landscapes. The film follows the Meike brothers, octogenarian sheep ranchers, through the arc of the year’s natural seasons, from the winter fields to the Big Horn Mountains in summer before trailing home in the fall. Yarden, a seminal video artist who recently designed video for The Crucible on Broadway and David Bowie’s Lazarus, first began filming the Meike brothers and their herds to create a backdrop for the opera of Brokeback Mountain in Madrid. Now, a work with its origins in theater spills out into the streets and screens of Times Square, even as it immerses one of the world’s most urbanized environments in the vast landscapes and skies of the Wyoming countryside.  And in the city that never sleeps, amidst the largest concentration of hotel beds, Yarden plays on the classic idea of counting sheep to help us pass into a night’s slumber or peacefully lead us into the new year.

On Wednesday, December 7, visitors can join Tal Yarden for a viewing of Counting Sheep. Please arrive by 11:30 pm for the 11:57 pm viewing on Duffy Square at Broadway and 46th Street.

A soundtrack to the film, composed by Yarden and his brother Guy, will be available on Soundcloud.

Tal Yarden, Artist, said “I’m fascinated by how nature marks time. Drawing on ancient pastoral traditions, I want to reconnect with a life guided by the seasons. As we count down to midnight, I want to remind us of a world beyond the urban canyon where losing count is a path to peace.”

Tim Tompkins, President of the Times Square Alliance, said, “In a month where we transition from one year to the next and begin new journeys into new seasons, Yarden’s work evokes our movement through time and life.”

Sherry Dobbin, Times Square Arts Director, said, “Tal Yarden is a seminal media artist, filmmaker and scenic designer whose immersive theatrical environments confuse the boundaries of where the media ends and the performer begins; it was natural that we would want him to consider the Times Square canyon and how we could have the same impact on the outside skins of the Broadway theaters.”

Fred Rosenberg, President of the Times Square Advertising Coalition, said, “It’s exciting to have the opportunity to display an artist like Yarden, who has created art for the interior venues of these buildings, from backdrops for the opera to videos for Broadway. Now we’re thrilled that he will be wrapping the outside of our digital architecture with his work, reminding us of the vast scale of Times Square.”