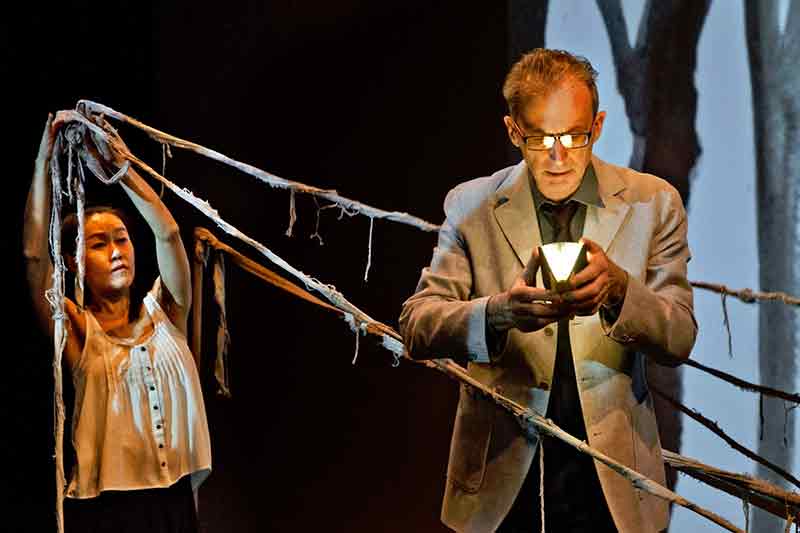 An Odyssey of Love, Karaoke and Kimchi

Written and Directed by Renee Philippi

Remembering Evangeline is a love story that moves across time, as a Korean war veteran reaches back 30 years to find a lost love and a daughter he never knew. Original composition, dance and visual theater fuse in a bewitching landscape of dreams and desires, karaoke and kimchi, in a playful and profound odyssey of love.

The production has set and costume designs by Carlo Adinolfi; choreography by Sook Kim and Eun Sung Lee; sound design and composition by Megan Culley; and lighting design and stage management by Casey McLain.

Since 2004, Concrete Temple Theatre has been in operation as a small energetic touring company based in NYC, presenting performances and leading workshops locally, nationally and internationally. Concrete Temple has created fifteen original works (seven touring) and is currently developing two new works. They have received several commissions, have had an extended run Off-Broadway and have been Artists-in-Residence at Dixon Place (NYC), The Yard (Martha’s Vineyard) and St. Ann’s Warehouse (Brooklyn). CTT have performed at Barrow Street Theatre, HERE, Bard’s SummerScape, Hudson Opera House, and at theatres in South Korea, Turkey, Costa Rica, India, Italy, Scotland, Bulgaria and Sri Lanka. concretetempletheatre.com

Concrete Temple Theatre is a multi-disciplinary company that emphasizes the creation of compelling new theater works that incorporate drama, dance, devising, puppetry, music, and the visual arts, and focus on the individual’s struggle for identity and society’s struggle for cohesion. Through touring their shows and presenting workshops in New York City, nationally, and internationally, Concrete Temple strives to bring myth and ritual back to the center of dialogue, while making connections and opportunities for diverse audiences to question and examine their place in the world.

Remembering Evangeline is a part of [email protected], HERE’s curated rental program, which provides artists with subsidized space and equipment, as well as technical support.

Carlo Adinolfi (Co-Artistic Director, Performer, Designer) is an actor, designer and puppeteer. He studied dance in his native Italy, and has danced with Laura Pawel Dance Company, Sara Pearson/Patrik Widrig and Dancers, The Corner Store, and Spoke the Hub. Carlo’s credits include creator, set and puppet designer, and performer in Bird Machine, The Whale, Hudson To China, Geppetto, The Bellagio Fountain Has Been Known to Make Me Cry, productions seen at Puppet and Theater Festivals in New York City and around the world, from Istanbul and India to Sri Lanka and Edinburgh, among many others. He has been a resident artist for many cultural institutions across the country and is a recipient of the Independent Artists Challenge Program Award, Jim Henson Foundation Grants, EST/Alfred P. Sloan Foundation Science and Technology Project Commission and a member of Ensemble Studio Theatre. He was recently awarded The Bel Geddes Design Enhancement for his Bellagio design.

Sook Kim (Performer) has been a choreographer, performer and educator of traditional and contemporary Korean dance in both United States and Korea since 1998. She is one of the founding members of Noree Performing Arts and has served on the faculty of the Yearlong Certificate Programs at the Laban/Bartenieff Institute of Movement Studies since 2009.

Eun Sung Lee (Performer) is a Certified Movement Analyst and internationally acclaimed dancer and choreographer. Trained in ballet, modern, and Korean traditional dance, her unique fusion of styles in her figurative dance expressions allows her to replicate tangible emotions. Ms. Lee is currently the artistic director and choreographer for the Noree Performing Arts in New York City and is involved in Korean dance and body movements education programs for senior citizens in Queens.

Renee Philippi (Co-Artistic Director, Director/Writer) has been has been writing and directing in NYC, nationally and internationally for over 25 years. Her works includeGeppetto, Alone in Triptych, The Bellagio Fountain Has Been Known to Make Me Cry, Bird Machine and The Whale, and have been seen around the world at Puppet and Theater Festivals from Istanbul and India to Sri Lanka and Edinburgh, among many more. In NYC, her works have been performed at HERE, Soho Playhouse, Dixon Place, Studio 301 and Barrow Street Theatre. Renee is a member of a Lincoln Center’s Directors Lab, New Georges, The League of Professional Theatre Woman and has been Artist-in-Residence with Mabou Mines, St. Ann’s Warehouse, Directors Company, Workspace for Choreographers, The Flea Theater, Hudson Opera House, The Yard, Dixon Place, and Directing Fellow at Williamstown Theatre Festival, among others.