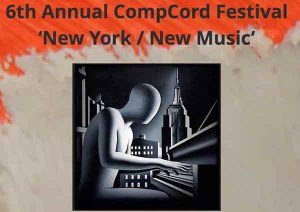 The second concert, at Spectrum NYC, will be the 8th annual ‘Composers-Play-Composers Marathon’. No fewer than 25 composers will perform original compositions inspired by New York. Featured composer-performers will include Adam Holzman (musical director for Miles Davis, also named by Keyboard magazine as one of the top 10 players in the world), award-winning bassist Mark Egan (Pat Metheny Group, Gil Evans Orchestra), and recent Fulbright recipient Paula Matthusen (“entrancing” – The New Yorker). Comedian and Chelsea gallerist Jim Kempner will perform a piece about the NY art world with Gene Pritsker – guitar and Peter Jarvis – drumset.

The third concert, ‘Sonic Divide New York’, at Goddard Riverside – Bernie Wohl Center, will be a performance-screening of percussionist-vocalist Payton MacDonald’s recent project, which combines newly commissioned music, ultra-distance mountain biking, and documentary film. The ‘Sonic Divide’ film tells a unique story of creativity, persistence, and ingenuity. MacDonald pedaled as much as 130 miles a day, from dawn to dusk, stopping only to perform music. He camped in grizzly country and struggled with extreme heat, cold, and storms. The film includesinterviews with the composers, other riders, locals, and a geographer. His performance will feature NY composers including Michael Gordon, Eve Beglarian, Elliott Sharp, Jerome Kitzke, Dan Cooper, Gene Pritsker, and Milica Paranosic.

The festival will wrap up at Gallery MC with the sixth concert, ‘CompCord Meets AFMM’. Composers Concordance and American Festival of Microtonal Music, two long-standing organizations, will join together to co-produce a concert focusing on NYC composers writing microtonal compositions. Composers include Svjetlana Bukvich, Monroe Golden, Johnny Reinhard, Zach Seely, and others. An ensemble of woodwinds, fretless guitars, double bass, and trombone will be conducted by Charles Coleman. Composer and bass trombone luminary David Taylor will also be performing.

Staying in rotation for 32 years in NYC is a rare feat. In the case of a new music presenting organization, it requires not only diligence and cognizance of achievements of the past, but also an ethic of keeping one’s ear to the ground for emerging stylistic and technological developments, as well as talented new composers on the scene. Composers Concordance strives to present contemporary music in innovative ways, with an emphasis on thematic programming. It has also created a record label, Composers Concordance Records, with distribution by Naxos. Directors Gene Pritsker and Dan Cooper co-curate the programs, and lead the CompCord Ensemble, Chamber Orchestra, String Orchestra, and Big Band. Associate Directors are Milica Paranosic, Peter Jarvis, Svjetlana Bukvich, and Melissa Grey. Composers Concordance’s overriding vision is to promote contemporary music, composers, and new works as a rightful and respected part of society. Good music, performed and recorded well, pushing the boundaries of sound and composition.

“For the past 30 years, Composers Concordance has been a booster for local composers, through both its concerts across the city and a record label.”  -The Wall Street Journal. “Enterprising new music organization” -The New York Times. “The Composers Concordance folks are unpredictable and at times refreshingly irreverent in a reverent sort of way….ingenious fun” -Classical-Modern Music Review. “Edgy…boisterous…demanding our attention” -San Diego Story. “These men and women are creating exciting music with elements of jazz, world music and many experimental techniques blended with equal parts classical tradition and playing techniques.” -Asbury Park Press. “There is considerable evidence to show that Composers Concordance may be one of the most exciting labels in American contemporary music.” -JazzdaGama.