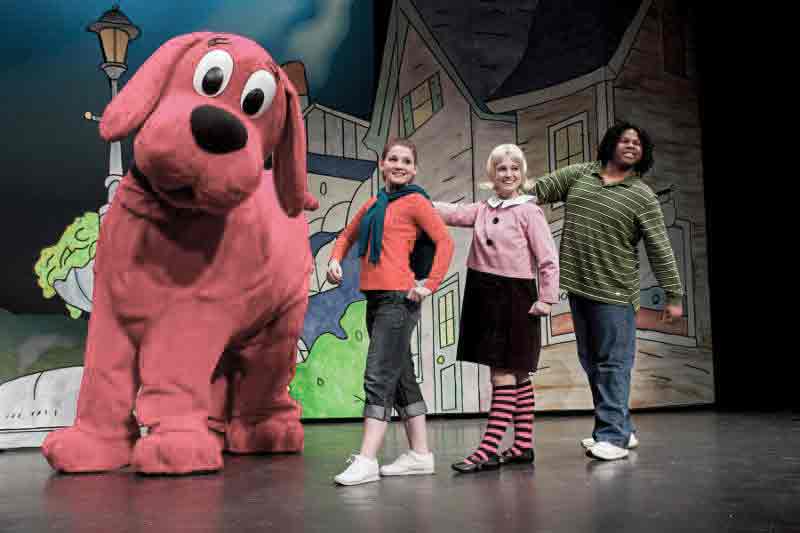 In this musical adventure, Clifford, Emily Elizabeth and the whole gang from Birdwell Island learn about Clifford’s BE BIG!™ Ideas – Share, Play Fair, Have Respect, Work Together, Be Responsible, Be Truthful, Be Kind, Help Others, Believe in Yourself, and Be A Good Friend – with memorable songs, creative choreography, and lots of laughter and audience interaction. Clifford’s Big Ideas came out of the curriculum developed for the award-winning animated PBS KIDS series Clifford the Big Red Dog, based on the classic children’s books by Norman Bridwell.

Produced by Mills Entertainment, the production features a book by Jeremy Dobrish and music/lyrics by Dennis Scott. The design team includes David Miller (scene), Paige Selene Luke (lighting), BJ Marchini (sound), and Isabel Rubio (costumes), with puppet design by The Puppet Kitchen. The production is directed by Daniel Seth (based on original direction by Mark Fleischer), with musical direction by Nathan Dame and choreography by Keith Coughlin.

About Clifford the Big Red Dog

Norman Bridwell’s love for drawing began at an early age, but he “was never considered very good,” he says. After high school, Bridwell studied at the John Herron Art Institute in Indianapolis and moved to New York to attend Cooper Union. While working as a freelance filmstrip and slide illustrator, he began assembling a portfolio of cartoons for children’s book illustrations. After visiting several publishers and being rejected, he stumbled across life-changing advice from a publisher at Harper & Row. She suggested that he create a storyline for one of his drawings, specifically pointing to one of a horse-sized bloodhound and a baby girl. Bridwell went on to create and publish the series known as Clifford the Big Red Dog with Scholastic Inc. “Sometimes you’ll do something that you really like and no one else does,” he says. “You’ll feel terrible, but you’ve just got to press on and keep trying. If you like doing it and keep working at it, then someday you will succeed.”

Brooklyn Center’s 2015-16 concludes on May 15 with Theatreworks USA’s production of Alexander, Who’s Not Not Not Not Not Not Going to Move. Visit BrooklynCenter.org for a complete season lineup.